So, you need to cut steel for a DIY project (like a crane or trailer).  Easy, Right?  What’s the best, easiest, cheapest, fastest way of cutting steel?  There must be dozens of ways, so, the better question might be “What method of steel cutting is best for you?”

Answering this question about cutting steel begs for some additional input:

Of course, this is the Do It Yourself Plans Portal, so let’s talk DIY options.  This discussion is limited to machines for cutting steel that don’t require massive or super expensive machinery.  We’ll eliminate wire EDM (electrical discharge machining), for instance, because the cost is typically overkill for DIY shops and the accuracy is well beyond the needs of most do it yourself projects.  We already covered Drilling, so we’ll leave that out too.

DIY Methods — How To Cut Steel:

Here are several steel cutting methods that are common for DIY craftsman. In the table:
– We use stars for general ratings.  More stars mean Cheaper, Easier, Faster, Smaller.
– Hover your mouse over the stars (and “Details”) for info about categories and ratings.

About The Stars Table

The ratings are based on personal experience.  I accept a variation of a star or so in any of the columns since it’s pretty hard to define how good or appropriate a particular method is for metal cutting in general.  I also recognize that there are many other methods, like sheers, snips, water jet and even bolt cutters, that are not on the list.  Basically, it covers methods of cutting stock for the types of projects covered by our DIY plans — things like our Trailers and Shop Tools (Cranes, and Presses).

Let’s take a look at a little more detail for each of these methods for cutting steel.

Cut Steel with a Hacksaw

The classic hacksaw (or hack saw if you prefer) is the quintessential metal cutting tool.  Hacks saws are cheap, small, and easy to use.  Every shop should have at least one because they can do things that are difficult or impossible with some of the other cutting methods.  They’re great to cut steel or aluminum or almost any metal.

For instance, in the photo shown, cutting at a steep angle to the direction of the material is quite difficult to set up for many of the other methods, yet it’s easy to do with a hacksaw.

Another plus for hacksaws: they can get into almost anywhere, and they can cut really small things that would be nearly impossible to put in a vise to cut with power tools. Blades for hacksaws are also easily available, relatively cheap, and come in lots of different tooth pitches. They are available for cutting steel or for aluminium. Additionally, hacksaws come in variations from the classic bow to the super small extended blade. Just make sure you get the teeth direction right!

The big disadvantage to a hacksaw is the time and effort it takes to make a cut. Still, despite the extra time and effort involved, a hacksaw is an indispensable piece of equipment for the DIY hobbyist. Certainly using one can be a lot of effort, but if you keep the blade moving straight in the cut, use a little cutting oil, and push only into the cut, then the hacksaw is not that bad even for big and thick materials.

The power version of a hacksaw (like a Sawzall) is much like a regular saw, but with the obvious advantage of power.  For cutting steel, they are quite useful, but it’s hard to get a good square cut.  Sometimes these are a lifesaver when cutting things already installed (and there’s a lot of that with DIY home projects), but usually as useful with new DIY projects.

You can use an abrasive blade on a number of different machines. The classic is the Chop Saw, but you can also put smaller discs on a circular saw, or on a die-grinder. (The circular saw method is how I built my first race car tube frame.)

The Chop saw is a great way to cut steel with straight / square cuts (and most angles). The circular saw is more maneuverable, cheaper and smaller than a Chop saw. Circular saws are also great for cutting sheets of metal and bigger stuff that you can’t put into a chop saw. It’s versatile, too – you can change to a wood cutting blade pretty easily so the tool can do multi-duty.

A good portable option is the die-grinder. It’s not practical for big cutting, but super nice for notching, for cutting small areas and for hard to reach places.

The big disadvantages for abrasive cutting are the mess and the constant replacement of blades.  As they wear, you can’t cut as deep or as big, so sometimes you end up switching blades even though the warn one is not totally worn out. 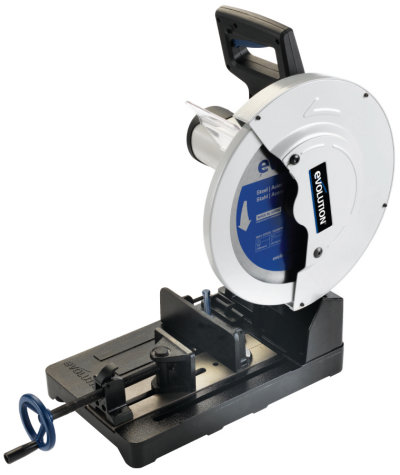 Another type of chop saw uses carbide tipped teeth on a circular steel blade.  It looks like a wood cutting blade, but don’t try it with your compound miter saw because the speed is much slower for cutting metals.

This method is simply machining — with a carbide tip cutter.  These are typically used dry, and the blades are specific for aluminum or for steel.  Blades last a lot longer (like 20 times longer) than abrasive blades and they don’t wear down as you cut. They do throw little chips of metal as you cut, but not nearly as messy as abrasive saws.  No abrasive dust in the air and all over the shop.

Another great thing is the relatively small space for using it.  I just put it on the floor, then use some wood blocks I made (right size) for supporting the workpiece level off the floor. After cutting, clean up is easy, and the saw sets nicely on a shelf. 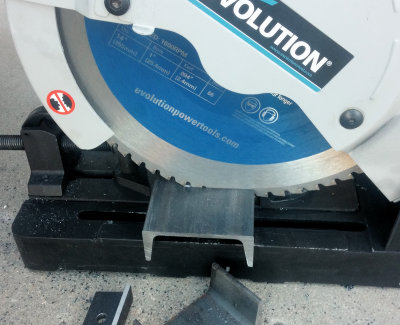 Carbide-tipped saws have Disadvantages as well.  They are initially more expensive than an abrasive chop saw, and their blades are more expensive too (though you save money in the long run because they cut much longer before they wear out).  Chop saws are great for straight cut-off type cuts, and angles (of 45 degrees or less), but not for out-of-position cuts.  Evolution (and others) do make a circular saw style too, (they scare me), if you want, or need one.

On A Personal Note

I bought the Evolution shown here and find it amazing.  Mostly I’ve used abrasive and band saw cutting, but this changed the game.  It’s easier to set up than a band saw, not nearly as messy as abrasive cutting, and faster than either of the above.  Plus, it’s relatively small so, it stores easily on a shelf.  The finished cut is is also quite nice and requires little or no post cut clean-up (with a file).  I’m a fan.

By the way, when the blade was really sharp, it made almost no sparks.  Now after building a couple cranes and several other big projects, you can see it’s making sparks.  See the image at the top of this post.  That means the blade is getting dull, so I need to get it sharpened.  I’m actually really impressed at the number of cuts one blade can do! 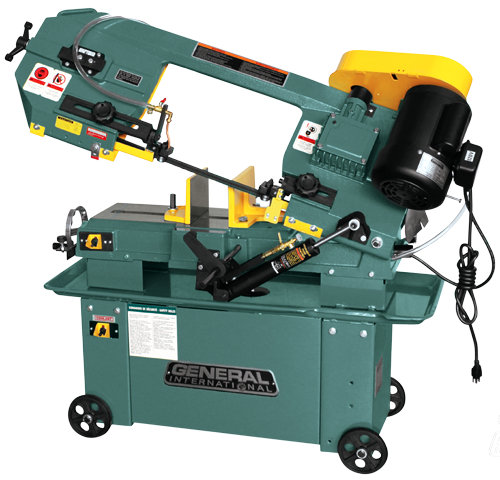 I had a big horizontal band saw for years.  The machine was truly awesome for cutting all different sizes of materials – beams, tubes, solid rod, etc. I thought it was the last metal cut-off type machine I’d ever need.

The cuts are good, and the blades last a long time if you’re careful to match the tooth pitch and speed with the materials you’re cutting.  Make sure you use flood cooling because that drastically improves cutting and blade life.

Has a moderate cutting speed, and it’s reasonably accurate when setup properly.  For big section pieces like solid bar, you just set up the saw and walk away.  If it takes half an hour to cut a 4″ solid, it doesn’t matter.  Just let it do its thing. For really big stuff, there is no question, the band saw is the way to go.

Smaller band saws, even handheld ones are available.  Unfortunately, I’ve never used a small one, so I don’t know what that’s like.

Disadvantages?  They’re big, not very portable, and to be most useful, need to have space for material supports (like conveyor wheels). 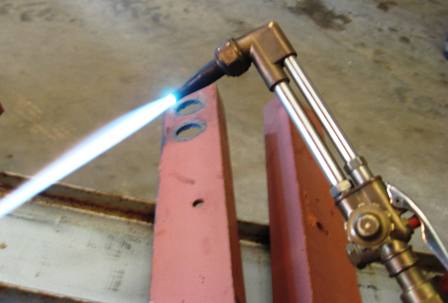 A cutting torch can cut through steel and almost anything else too, but you must be really careful about what’s around it! Note the flame as in the Photo from wikihow.com.

For fabricating, cutting torches are not as useful because it’s nearly impossible to get much accuracy, and the finished cut is often jagged and rough. Cutting other odd shapes like an I-Beam is even worse.

Anyway, other than the tanks, they are not that expensive, and they don’t take that much space to store.  Of course, that depends on the size of the tanks you choose. 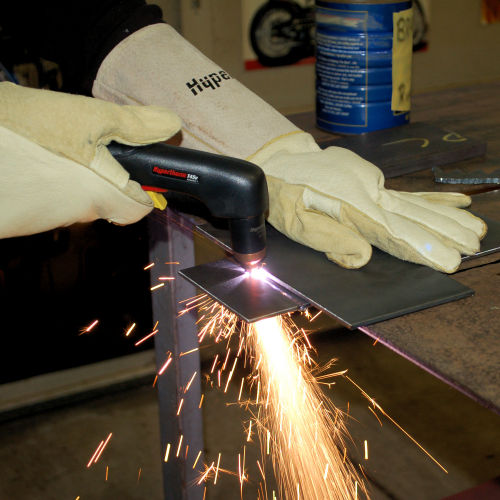 These things are really amazing.  If you have not tried one, you should. For cutting steel sheet and flat materials, they are easy and fast.  Plasma is definitely one of the best ways to go if you’re cutting shapes from plate.  Laser or waterjet may yield nicer edges, but they are much more expensive to purchase and to run.  You can also do free-hand cutting steel with plasma, if you’re steady, without much trouble.

A lot of implements and attachments are available to help you make a good cut.  Or, you can make them yourself.  Using a straight edge to guide it, or a support to keep it a correct distance above the workpiece makes the job easy.  This Photo from www.fabricatingandmetalworking.com shows plasma cutting steel using an edge as guide for a straight cut.

Plasma cutters are extremely flexible in that you can use them in different positions and do all sorts of crazy shapes — like drawing in cuts.  Again, like torches, you really need to be careful about other things around while it’s spraying molten metal.  The excitement it brings is not usually the excitement we want.

The cut finished edges leave something to be desired compared to some of the other steel cutting methods above, but it’s much better than a cutting torch, and this tool will do lots of things other methods just can’t.

Disadvantages include the usual — high cost for really cool machines.  They are not as accurate as a saw, and the surface finish of the cut is not as good.  They are also cumbersome for cutting shapes (like I-Beam), and tube (if you want a good cut all around).  Oh, and there are some limitations due to the sparks and welding fire they spue.

Every cutting method has its advantages and disadvantages.  They all have areas where they shine, and areas where they won’t do so well.  No single method can do it all, so for us in the DIY arena, we need to choose the methods that do what we need most – tempered, of course, by what we can afford and what fits our work space.  With that in mind, you’ll likely want more than one for your shop. Start with the hack saw, because it’s the most versatile, the cheapest (by far), and the smallest.  Next, maybe an abrasive saw of some type, then move up as your needs (and budget) dictate.

Without other constraints, to cut steel (or aluminum or other metals for that matter), we suggest the following.

There is always something to learn when looking at someone’s project.  This customer story about a unique trailer build is no exception.

An excellent customer story about a complete trailer rebuild.  We talk about it once in awhile, and we give some advice, but this is the first customer story that is truly about doing a full rebuild and reformat.

More new plans, and even more coming.  You’ve been asking for robust Deck-Over Trailers, so that’s what we’re working on.  The first are here, and