There are a lot of ways to abuse a crane.  We won’t go into those, but let’s do take a minute on crane failures and what they look like.  In general, there are 3 main gantry crane failure modes.  Let’s look at them, then discuss contributors and solutions to make your crane more robust.

What Is A Failure Mode? 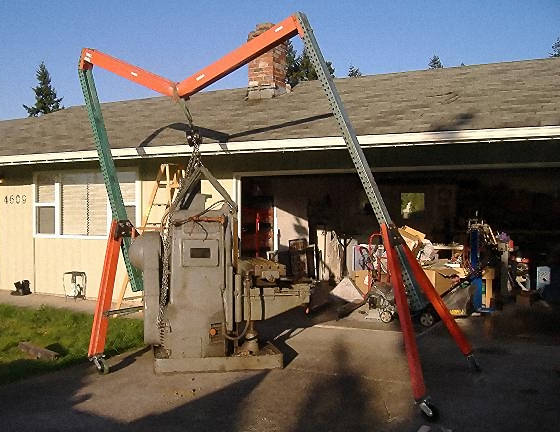 This is sometimes called top beam folding.  I found this image online at:  The Practical Machinist.  Don’t know much about it, but I think it’s awesome as a DIY crane gone wrong.

The crane construction is a nice idea in some respects, and it probably serves well for light things, but this time it’s a bit too far.  Classic gantry crane failure.

Note how the top beam folded very tightly around the lift strap.  Also, how the bending of the top beam then over-stressed and bent the top portion of the vertical leg.  This is a perfect example of exceeding the top beam capacity.  I’m glad are no injuries.

Things that contribute to this kind of failure include these.  Solutions to make it better are also in the discussion.

There are a two ways a crane leg will typically fail.  Usually for a gantry crane, the failure occurs because the top of the leg doesn’t stay directly over the bottom.  (Think straight up and down.)  And, that is evident in the first photo above.  When something happens to wiggle the top beam or move it somehow — either by a swinging load, or someone trying to drag it on it’s casters, or some other condition — the load in the leg becomes less than axial, and often that leads to failure.

For example, in the crane failure photo above, the folding of the main beam pulled the legs (both) inward, and put a huge bending moment at the leg tops.  The relief of all that stress came when the top of the one leg also failed (bent).

The second, much less frequent failure is column buckling of the legs.  That means the leg becomes over stressed and collapses.  Most times that’s a bowing out and buckling of the leg, but on rare occasions it’s a collapse like stepping on a soda can.

To be complete, a third type of leg failure is when the gantry is on a track, and the track supports fail.  A concrete wall, for instance, but we won’t go into that.

Here are some things that can cause this, along with solutions.

There’s a lot here to take in.  Hopefully I’m communicating that it’s a bunch of little things that keep the crane standing up.  It’s important to note that many of these compound to weaken a crane.  For instance, missing upper gussets, wheels, and a swinging load.  (It’s the photo above with a swinging load, and it all comes crashing down.)

I’m not sure how to label this one, but basically it means things are not straight and true.  For instance, using a gantry crane on a sloped driveway — the loads don’t go straight down through the legs.  The legs then carry a bending load too, so the total vertical load capacity is drastically less.  Another example is when the feet are not sitting parallel, creating a twist on the top beam.  How you place the crane matters.

Another aspect of sure footing is the security of the leg position.  To that end, we have a whole article section below about wheels.

Nearly all Gantry Cranes have some type of mobility.  On smaller cranes wheels are nearly universal, and why not, it’s so much better for crane positioning and/or moving the load.  However, they drastically decrease the load holding capacity of the vertical legs.  No, not because of the wheel capacity, but because they don’t give a stable platform for the crane. 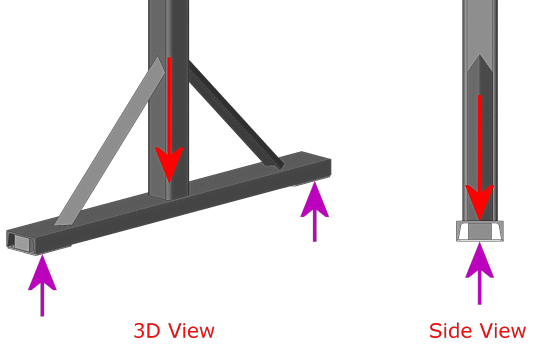 Think about the crane leg setting flat on the ground.  Think of it as the “T”, upside down with two large gussets supporting it.  That’s typical of a small gantry.  See the image.

Vectors in these images show the major forces.  Red arrows show force down through the leg from the top beam.  Purple arrows show the forces supporting the crane (from the ground).

The legs in this first simple case will not roll or slip or otherwise move when a significant load is on it.  It also directs the vertical loads coming down the leg directly into the ground.  Because the bottom is flat, it’s perfectly happy standing there straight up. 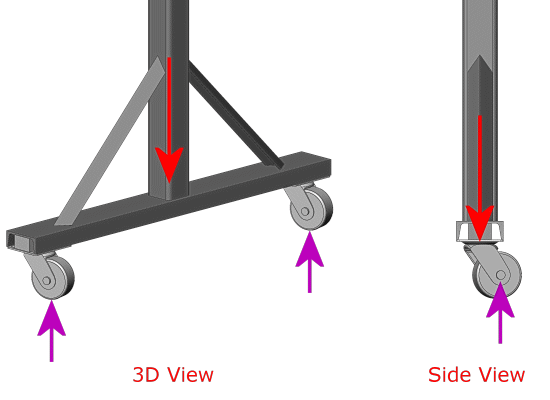 Compare that to the same crane let, but with casters added.  Forces are basically the same, except they also pass through the added wheels.  Of course, these wheels are plenty strong, that’s not the issue.

Wheels naturally want to roll, so only a little force will cause them to do it.  The load coming directly down the leg is NOT straight into the ground — it’s offset by the caster distance.  (In the side view.)  That means the leg naturally wants to tip over.  More explicitly, it wants to start tipping then roll out and fall.  It’s only because of the joint strength at the TOP (where the leg connects to the gantry beam) that the legs stay vertical.  These legs definitely will not naturally stand up on their own.

In engineering speak, we refer to legs with wheels as having additional degrees of freedom.  The leg is NOT solidly planted, so movement must be accounted for.

Having wheels on the legs allows the legs to more easily move or bend, which puts a lot more stress at the top beam joint.  If you must use casters, make sure you overdesign the legs and especially the joints, to take lots of additional stress.  Even if you orient the wheels so the leg forces are planar, if you move the crane, they will caster.  If you won’t be moving the crane when loaded, why have the wheels? 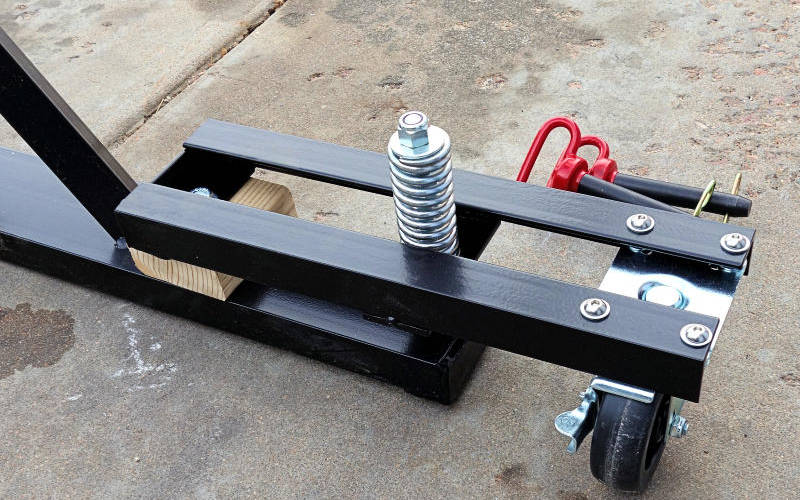 We like wheels, so, our solution is to put springs between the legs and wheels such that the springs compress and the legs stand firmly on the ground under load.  This solution gives roll-around freedom when empty (or lightly loaded), yet forces safety when loaded.  See the photo.  This approach is simple, and solves the safety problems.  (Blueprints for these are in all our Gantry Crane Plans.)

We often think of the Gantry Crane by itself, the legs and the overhead cross beam.  Those by themselves don’t often fail — unless there is something attached — the load — which is held by auxiliary equipment.  The lifting equipment is the 3rd gantry crane failure mode.

We won’t spend a lot of time here, but there are trolleys, straps, chains, cables, hooks, winches, gears, levers, come-alongs, pulleys and a host of other things that can lift the load.  How they connect to the crane is crucial (as mentioned above), but also their own capacity and the interaction of you with these devices.  Make sure auxiliary equipment is rated for the loads, and make sure you know the weakest link.

If you think some of these gantry crane failure modes are weird, please think about stressing things near their limit.  It doesn’t take much to push them over the edge.  Unfortunately, they don’t usually give much warning.

The best practice is always to respect the crane and other lifting equipment.  By respect, I mean don’t push it to the limits, and follow the practical safety measures.  Just don’t do it, because in a fraction of a second you may destroy your work at a minimum, or totally change your life at the worst.  It’s just not worth it.

Disaster strikes in seconds, like in this gantry crane accident.

It is always interesting to me as an engineer as I consult with people about failures.  Forensics, as we call it, is really figuring out what happened and why things die (fail).  Not very often is it just one thing.  Normally it’s a series of things that create the final problem.

Looking at the small crane image above (the one that says Cap 3 Tons).  I can see this one ready for problems just because there are several small things biasing a reduced capacity.  First, the wheels make it so the legs are not secure at the bottom.  Second, the beam is pretty high.  Longer legs = lower capacity.  Third, the top joints where the gantry beam connects to the legs is not very solid.  There is not a gusset there to stiffen that joint.

A Scenario:  So, the crane is placed and a full 6000 lb load is lifted with the chain fall. Then one of the guys grabs a leg and pulls on it hard to the side to move the crane.  That introduces motion, but the inertia of the load doesn’t immediately move.  In a second, the load starts to swing on the crane, which makes it easier for the guy to pull the leg (while the load is swinging his direction), so he pulls more.  The load then starts swinging in the opposite direction, with the guy still pulling on the leg, and suddenly the legs splay and it all comes crashing down.  There are no serious injuries, but the the splaying leg undercuts the guy pulling the crane.

It’s not one thing, it’s a combination of things.

The gantry crane is a system, and gantry crane failure is never out of the question.  Just be smart, and the likelihood of you being an eye witness of such a failure goes way down.

If you’re interested, here are 4 Pressing Issues along the same lines.

Good Luck With All Your Lifting

What Is The Right Trailer Tongue Length? Why BUY Plans, If You Can Get FREE Plans?

There is always something to learn when looking at someone’s project.  This customer story about a unique trailer build is no exception.

What are the best ways to attach safety chains on a trailer?  That’s a simple question without a single best answer.  Don’t you hate it when the answer starts with “It depends . . . “?  Unfortunately, it does depend on other things