There are really 2 ways to think about this.  The first is actually improving fuel economy.  The second is finding ways to just spend less on fuel.  They are kind of the same, but they have some distinct differences.  We’ll talk about both.

When we think of economy, we really need to think about what makes our vehicle work harder.  The harder it is to move itself (and the trailer), the more fuel it will use.

What Are The Biggest Fuel Economy Effects?

Some people will swap 1 & 2, so if that suits you better, it’s all good.  I can go either way.  The order can easily change based on the speed and terrain you travel.

We will discuss these in a lot more detail below.

These next items have a lesser effect, but are worth noting.  These are not so much about ways to improve fuel economy as keeping them from robbing you.

For Brakes and Bearings, the best way to check them is to simply jack up the wheel and spin it.  If it spins freely, you’re good.  If it sounds bad (grinding sounds), or quits spinning quickly, then this may indicate something is not as efficient as it should be.  Then, you can dive in a little deeper.

When you carry something heavy, it takes more effort.  When you pull something up a hill, it takes a lot more energy.  That’s Weight.  Remember, anything that makes the tow vehicle work harder gives us lower fuel mileage.

Every time you start and stop, you have to move the weight.  True, at steady state on flat roads, weight has much less effect.  So, it depends some on where you drive.  Yet, no matter where you go, you will be accelerating at some point, and that is the big consumer of fuel.

We had an old saying in racing.  — If you can’t throw it to the end of the track, and if it doesn’t help everything else get there, then it doesn’t go on the car.  Something to think about.

Oh boy !!  This is one of my favorite topics, and there is a ton to talk about.  In engineering school I studied this.  After hours I experimented with it.  On the race course I practiced it.  I really like this topic because it’s not always as simple as we think.

I won’t go into too much here, but if you want more, let me know in the comments, and I’ll consider writing something with more detail.  (In the meantime, check out the many topics at Ecomodder.com )

The mathematical equation includes air density and the 1/2 constant, but we’ll side step those to look at the things where we have some control.

1.  The size of the object we are pulling really matters.

This includes both the tow vehicle and the trailer – everything.  If you can reduce the frontal area by half (all other things being equal), then the wind drag is half.  Reducing frontal area is not always possible, but some things to consider are the extras that poke up or out of the trailer, like an RV air conditioner, roof racks filled with stuff, etc..

From an aerodynamic standpoint, you can improve fuel economy by going longer instead of higher or wider.  Again, sometimes it is not practical, but it’s worth knowing. 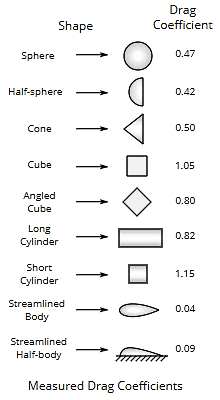 Coefficient of Drag is a number having to do with the shape of the vehicle (including trailer) passing through the air.  It’s kind of a measure of how slippery the item is as it passes through.  A lower Cd is better.

Please note that the Coefficient of Drag is NOT about the size.  Size is covered in the discussion above about Frontal Area.  This graphic from Wikipedia shows many differences based on shape.  Not that these are all that applicable to trailers behind a car, but it gives a good perspective.  A sharp cornered front compared to a rounded front makes a difference — but not as much as a nicely tapered tail.  That’s where the real gains are.

You can reduce the coefficient of drag by removing all the extra things that stick out from your trailer.  Things like bikes up on top create a lot of drag.  Think of it as smoothing the flow of air over the surface of the trailer.

Let’s take a minute to ditch some myths.

Speed kills fuel economy.  In the equation, please note it is Velocity2 (Speed Squared).  That means if you double your speed, you 4 times the aerodynamic drag.  So, the faster you go, the more it will cost.  If you want to improve fuel economy, slow down.  (I hate even typing that because I like speed, but my liking it does not change physics.)  That’s why this is one of the biggest factors to improve fuel economy.

If you are driving into the wind, that effect increases because it’s not the velocity of the vehicle to the road that matters, it’s your velocity into the air.  So, on the good side, if you are traveling with the wind, your velocity through the air is less than the speed of the vehicle with respect to the road.  Well, we can’t always choose to travel in the direction of the wind, but it does improve fuel economy when we can.

As a side note, I had a little Subaru that usually got about 24 MPG.  On one trip traveling in Wyoming into a strong wind, I really had to push the car to get it to go the speed limit.  75 MPH I think.  For that tank of gas, the car only got 13 MPG.  Yes, it was the wind, absolutely, but there is also one more important effect.

All modern vehicles have computer control systems that keep your engine running to perform the task you request.  When you push the gas pedal, the engine responds by providing more power.  In the normal operating range, the vehicle controls keep the combustion close to ideal for efficiency.  However, at heavy throttle conditions (when you are pushing hard on the gas pedal), the control system will often enrich the fuel (put in more fuel) to help control max output and to help control heat.  If they didn’t do that, there is risk of burning up the catalyst or other engine damage.

The enriching scheme provides max power, but it consumes even more fuel.  That is part of why the little Subaru took such a deep cut in fuel mileage on that trip.  The small engine was working really hard to perform as I was requesting, but the downside is it took a lot more fuel to do it.

It is a similar argument for pushing it hard up a long hill.  Driving in the mountains, for instance.  The point here:  When you push the limits of your engine, it will give you all it can, but it will devour the fuel.  It’s a trade-off you have to make.  So, back it off some if you want to improve fuel economy.

Side Note About Bearings (Myth Busting)

If you check out different size axles, you can feel there are differences in bearing drag.  What you are feeling is the difference in size of the bearings and the effect of the grease.  Bigger bearings (bigger in diameter) have bigger pieces inside.  With no load, the grease will have a greater effect on the free spinning.

The other factor . . . bearing preload is usually higher with bigger bearings, which will also give a higher no load resistance.  However, this is a pretty small effect.  Driving down the highway with an appropriate respective load, say 50% of the rated axle capacity, both bearing sizes should roll along with about the same-ish resistance — tiny compared to aerodynamic drag.

As above, if bearings have a lot of drag, it is probably because the have too much pre-load, or old/sticky grease, or they have damage.  Worn bearings will usually make noise like grinding, or feel like they are gritty inside.

Some Out Of The Box Fuel Economy Tips

Concepts to improve fuel economy reach much farther than just while you drive.  Try this list of ways to decrease fuel cost.  These do not change fuel economy, but they do save money at the pump.

What Can I Do Right Now?

A lot of the things we’ve discussed above are sort of theoretical or require some major overhaul.  That’s nice in perspective, but there are some things you can do right now, today, without a whole lot of work.

These 4 things can have an immediate impact on fuel costs.  They may not be practical in some situations, but keeping them in mind will reduce the load on your wallet.

Good Luck as you improve your fuel economy.  The world needs more thoughtful consideration for fuel use.
Have a wonderful day!! 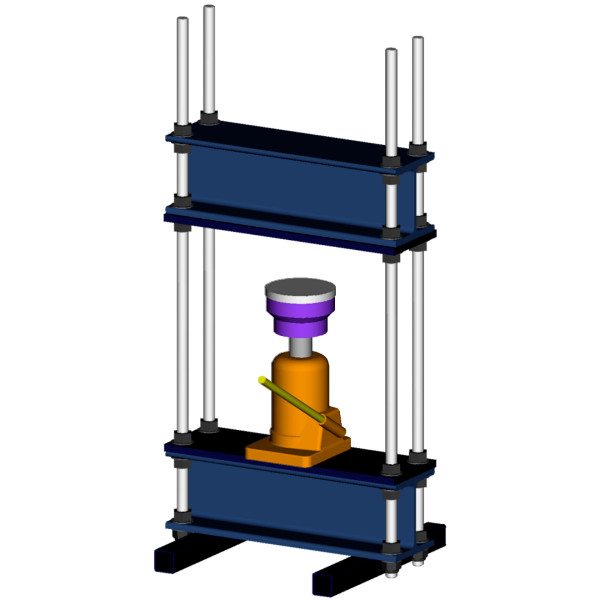 Should you twist trailer safety chains to make them shorter?  Certainly twisting them reduces the length so they don’t drag the ground.  That part is good.  However, there are big issues with twisting safety chains?

Making Changes To The Plans

I can’t find quite the right plans for the trailer I want to build.  Can I make changes to the plans at Mechanical Elements to fit my needs?

Sixteen feet length at 6 tons capacity is a good size for hauling heavy things -- from multiple ATV’s to UTV’s to large loads of building materials or landscaping products.  Fully engineered to take it all.

Which Trailer Plans Should I Buy?

I want to build a trailer, but there are so many possibilities – and some things are mutually exclusive.  How do I narrow my thoughts?  What things do I really need?  And, most important, How do I choose which Trailer… 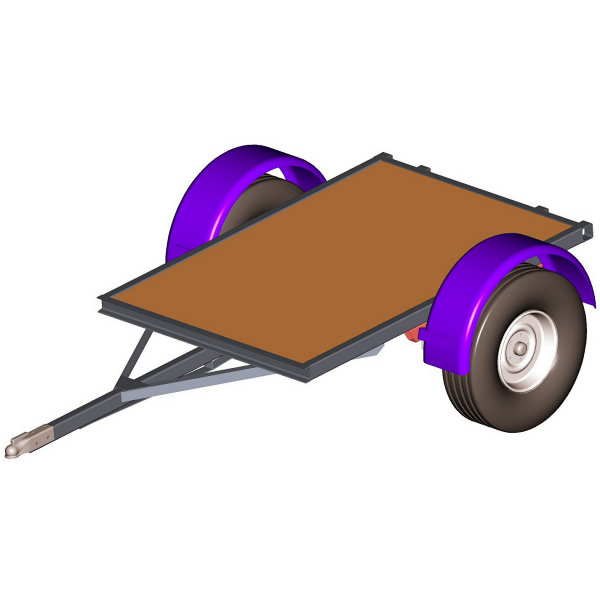 Build a great little Off Road Jeep Trailer with these Plans.  The 4 x 6 is a nice adventure size to use with a Jeep or any other 4x4 or OHV.  Customize the Height, Box, and Ground Clearance with options…

How To Mount A Trailer Axle Straight

Of all the important things to do when building a trailer, getting the axle(s) right is near the top of the list.  It’s the position on the trailer, yes, and proper alignment as well.  In this article we look at…

There are many different sizes and shapes of the suspension equalizer link.  What are they for?  Better yet, when should I choose one shape over another? If you’ve read much on this website, then you know 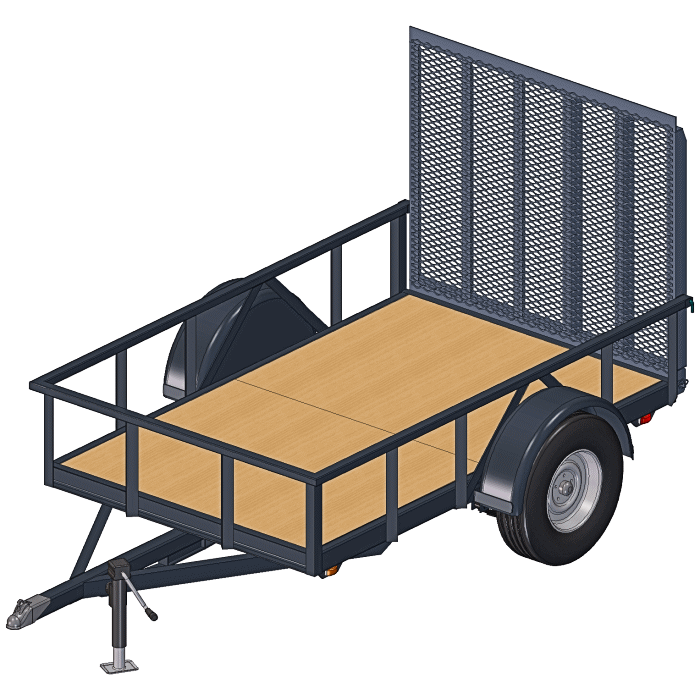 Start building your own utility trailer with these 5x8 Trailer Plans.  Blueprints are fully engineered and include options for various needs.  These plans are a perfect map for a great project.