More new plans, and even more coming.  You’ve been asking for robust Deck-Over Trailers, so that’s what we’re working on.  The first are here, andwe’re not talking about another “Me Too”.  Though they are similar to many, it’s to fit the needs, but the details and the options set them apart.

Like all the trailer plans from Mechanical Elements, the design is for superior service for a very long time.  And, like most of our plans, these come with a bunch of options.  Which is what you expect — if you’ve been around here for a while.

Admittedly, this has not been quick.  With a ton of work going into both design an analysis, the new trailers take a while.  It’s all about making sure they go together well, perform at the highest level, and you can build them.  We’ll get into some details below, but let’s start with the easy stuff.

The standard Deck-Over trailer has a flat rectangular bed, continuous over the wheels.  It’s why the name “Deck-Over” trailers, though there are other descriptive names too.  Anyway, “Deck-Over” is a pretty common description so we say it too.

With the deck over the wheels, it means the deck is usually higher than those of typical ‘utility’ style trailers.  It doesn’t mean it’s any less utilitarian, they’re just higher, and have a broader load space.  It’s utilitarian in a different way, for a different cargo.

While we sometimes think of Deck Over trailers as the big ones, they actually come in a bunch of different sizes.  Check out this trailer rebuild story for a smaller one.  It’s cool.  And, he did a great job with it.  The smaller ones are usually the exception.  Most Deck-Over’s are large — like legal limit width, and sometimes pretty long.

The standard at Mechanical Elements is pretty high in regard to sturdy build, strength and functionality.  We believe the trailer needs strength, for sure, but also robustness for the many ways trailers see miss-use and even abuse.  Of course, we discourage that, and we hope you don’t accidently back into a tree.  However, the trailer design will take a certain amount of oops.

Like with our Tiny House Foundation Trailers, we took a long look at the things Deck-Over trailer owners expect.  We considered the many common options and ways the trailers are built.  We spoke with owners and examined existing trailers.  So many good things to see, as well as some eye-brow lifters.  Then, out of all that, we find a good balance of features, functions, and options.  And, in a design that fits for DIY.

Well, it’s not ALL about the features in Deck-Over Trailers — the engineering is an absolute, too.  All our plans are fully Engineered at Synthesis including FEA (computer stress analysis) to make sure you’ll end up with a robust design.  After a lot of analysis and thinking, the next step is creating the most complete trailer blueprints available.  That’s the way we roll, and that’s why this is the place people trust for DIY Plans.

Please feel free to read more about What Goes Into The Plans.  If you need plans, these are at a 99% discount over a custom trailer design.

There are not many differences between a trailer design for mass production and one with a design for DIY, yet there are a few — some rather important.  These are always things we keep in mind through the design and the engineering.

The DIY builder doesn’t usually have access to really big equipment like a 500 Ton press for stamping.  When we fabricate, we need pieces we can purchase and usually just cut to fit.  Sometimes some light bending is needed, or something along those lines, but DIY has a hard time ponying up $50,000 for a die to form a beam, for instance.  We justify that in high production because it can save a ton of assembly time and lots of money over the long haul, but for one . ? . ? . ?  Not so much.

That is not the whole story, though.  We do use flat metal bending because that’s a great DIY thing.  And, if a bar is too thick for your equipment to bend, then just cut it, and weld it together again at the proper angle.  That’s something DIY can handle.

Shapes work.  It’s easy enough to get some fancy shapes cut — I prefer Laser Cutting or Water Jet, but Plasma works too.  The fun shapes are not essential, but they do add a bit of class to the trailer.  Deck Over trailers like the one shown here often have a shaped tail plate, with holes for ramps.  That’s an easy part to send off for cutting.  Someone like Big Blue Saw will cut it, then ship it to your door — or most places have local suppliers.

With a ton of available possibilities in production, it’s easy to specify certain lots of different materials.  Yet, for DIY, that’s not so true.  The designs need to accommodate materials that are widely available and can be purchased in small quantities.  Standard angles, rounds, bars, c-channel, I-beam, tubes, etc. for example.

To go one step further, I personally think it’s nice when I don’t have to buy 20 different beam shapes just because the plans call for a foot or two of a particular type.  One of our focus’ with these new Deck Over Trailers is keeping the total count of different materials down.  The goal is to minimize the extra material left over.  While it’s probably not possible to design a trailer with no scrap, we can certainly communize materials to reduce the left-overs.  Hopefully that means you don’t have to purchase a bunch of extra.

These are just some of our philosophies with respect to designing for DIY.  That is how we design the new Deck Over Trailers, too.

Or, call them customizations, because your choices make the trailer uniquely you. 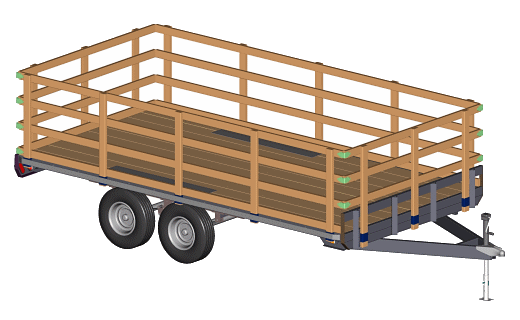 One of the big differences between the Mechanical Elements trailer plans and those of our competitors is the options.  We build stuff too, and our idea of the perfect trailer is not likely the same as yours.  So, we give you lots of options, and encourage you to customize things the way you want them.  It’s a pretty simple concept that gets lost with many other vendors.

For you it means information that helps you get the trailer you want.  For us, it means a bunch of extra work to coordinate the options so everything works.

Customization and options are more present in these new Deck-Over trailers for sure.  There are a bunch of ways to customize and hopefully we’ve hit on a few for you.  Don’t just look at the pictures, there’s a ton more to see because we can’t really show everything here.  And, we encourage you to add your own.  When you’re finished, we want you to be super excited and glad you built it.

Funny, but this is a question people ask a lot.  Do the ramps hook on the trailer back?  What about on the sides?  Answer, of course they do.  We’ve gone one step further too.  Like most, the ramps slide in the back for storage.  On the way out, they catch at just the right point so you can set the end down, then just lift up the caught end to place it on the trailer back hook bar.

As mentioned, we won’t tell you exactly how you MUST make the ramps.  We have a base design, yes, but we also tell you just what can change and how that will effect the load capacity.  There is a loading capacity chart for the ramps in case you want them stronger, lighter, longer, shorter, or whatever.  We also tell you what else needs to change if you — for instance — change the length.

Plans For The New Deck-Over Trailers

Blueprints (or Plans, whichever you prefer) from Mechanical Elements are top notch.  They include the blueprints themselves, with lots of notes and dimensions.  Our plans also include an instructions document with step by step directions and lots of added illustrations and info.  We consider these the best available, so take that for what it’s worth.  For example, the new deck-over trailers have about 50 pages of illustrations, directions, dimensions, hints, tricks, lists of materials, and advise to successfully build it.  Our competitors might send you 3 or 4 large sheets.

Well, enough about the design of these new deck-over trailers.  Here are links to the plans.  We’ll expand the list as more trailers are complete, but here’s what we have right now.  They are available for purchase, then you can download the plans immediately following payment confirmation.

Get your plans by selecting one of the links.  Build your trailer to take the loads without complaining, and keep on doing it as long as you ask.  We’ll get you the Deck Over Trailer plans, then you build the dream.  Good luck with your build.

Wheels And Tires For Your Trailer Customer Story – A Trailer Rebuild