Because you asked . . . Why do you want Overslung or Underslung trailer springs? It’s a good question, and the concepts are pretty easy to see with some graphics.  OK, let’s start with the basics first.

What is Overslung or Underslung? 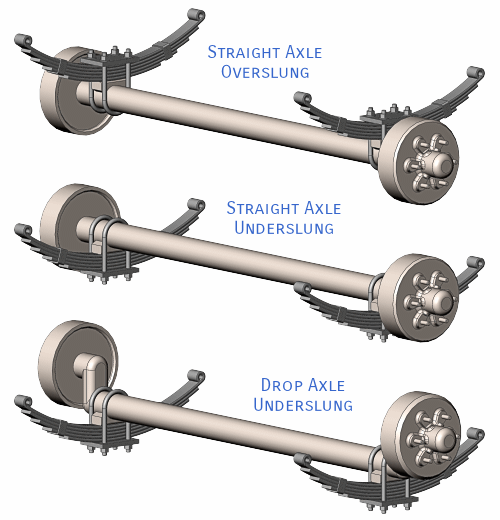 In essence, the terms are a descriptor of how, and where trailer axle leaf springs connect to the axle.  In the first case, Overslung, the leaf springs sit on top of the axle.  You can see this in the top portion of the image.

In the second case, Underslung trailer axle springs attach below the axle.  They effectively ‘hang’ from the axle while the U-Bolts carry the load.  The middle example in the image illustrates this.  We have a trailer building video also posted that shows assembly of an Underslung axle.  Worth a watch if you want to see a full trailer build.

Just for grins, the third example in the image shows how Underslung trailer axle springs attach on a “Drop Axle”.  It’s really just the same, but the drop portion allows the axle to sit lower (relative to the wheel center). The real effect of placement is more obvious in the next image as we visualize frame height in comparison.  See also the article on Trailer Axles 101 for more axles background.

There are basically 3 effects for choosing between Overslung versus Underslung trailer springs.  Let’s look at each separately, then we’ll put it all together.

The big effect here is the height of the frame member with respect to the ground.  Assuming the deck attaches on the frame, then the real essence is deck height.  Drop axles are a great way to lower a deck, especially when they use underslung trailer springs.  The opposite is true for raising the deck, and the effect is big.  The drop axle accounts for a 4″ vertical change.  The overslung versus underslung accounts for 6.5″ in this particular example.  (That amount changes with different axle sizes and spring stacks.)

Why would you want to raise the deck that much?

While there are many reasons to want a higher deck, probably the most common is clearance.  This can be clearance for the axle to the frame, or to accommodate oversize tires.  Sometimes it’s by design so the trailer bed is high — like with a deck-over style trailer.

The trailer end clearance, on the other hand, does change as the frame goes up.  Also the clearance under the trailer, above the axles, increases.  Some people use this space for storage like ladders, ramps or other things that slide out from the back.

The stability concern is more about the direction of forces and compliance in the system.  To illustrate, let’s look back at the 3 axles in the images above.  For a condition where the forces are purely vertical, like steady state down a smooth road, then there is no real difference for stability in any of the configurations.

However, when the forces are not purely vertical, like hitting a bump, a dip, or braking, the 3 configurations are not equal.  Look at just the center image above — the straight axle with underslung trailer springs.  If you think of the wheel and axle as the place braking and bounce forces come into the system, then the ends of the spring (where they mount to the trailer frame) are the anchors.

If the excitement forces are horizontal, then the spring ends and axle are sort of in a straight line.  That makes the triangle from front spring mount to axle to rear spring mount very shallow.  See graphic below.

Now compare that to the overslung springs image.  It’s triangle from front spring mount to axle to rear spring mount is tall.  Since springs are, by definition, compliant, then much more of the force will go to “twisting” the spring.  Since the forces we’re talking about are not consistent, the spring will react to various inputs sometimes a little weird, causing some minor instability, manifest perhaps in shuddering or something similar.

In most cases, it’s a pretty small effect, but sometimes not.  As a grossly general rule, the greater the distance from the spring connection points to the wheel centers, then the more apt the system is to display such attributes.  Think of it as the lower the peak of the triangle, then the more potential there is for unstable attributes.  Also, if the triangle points up, that’s more stable still.

The above discussion about triangles makes it seem so simple.  It’s far from that, but it’s presented for thinking expansion.

Also, from the above graphic we might assert that longer springs help stability.  While that can be true, compliance also enters into the equation.  Longer springs are typically stiffer per inch, but have more flex overall.  Then there are spring anchors — at least one on shackle or slip.  So, on multi-axle trailers, for instance, the middle area moves and actually detracts from stability.  Without going into a lot of detail, yes, longer springs typically help, but that’s not absolute.

There is a lot written about axles with overslung or underslung springs — though mostly about conversions.  I like this article from Do It Yourself RV because he hits on several topics that many miss — like camber.  The article also talks about stability and gives the advice that if you’re having stability concerns, changing from underslung to overslung is not a good ideal.   I agree.

There is also a lot of jabber in various forums about it, but be careful because a lot of stuff in the forums is just some random opinion and some is misleading.

If you want overslung trailer springs, order the axles and springs that way to avoid retrofit and “flipping” issues.  That’s not always necessary, but it’s the safe way.  Also, there are differences with single axles and multi-axle trailers.  Ask a manufacturer before converting.

One particular comment that made me laugh is a guy wanting to flip a drop axle upside down with overslung springs to give more ground clearance.  Though it may first seem creative, it’s a bad a idea on many levels.  I can see it working — until it doesn’t — with pretty catastrophic consequences.  Maybe at really low speeds.?.?  Please don’t let anyone talk you into rotating drop axles, especially for highway use.

A piece of advice:  Change out the bolts when you do a major revision of the suspension.  Double check that they are not rusted, and if needed, change them — but make sure they are sufficient quality and grade.

First, let’s be clear.  There is nothing inherently wrong with Overslung or Underslung springs.  Certainly underslung trailer springs are much more common, but that might be because overslung raises the trailer so much.

The two situations, overslung and underslung, are out there and both are common.  Yes, there is a stability difference worth considering, but it’s not a show stopper if you really want the added height.  Just don’t forget the much more important stability concerns of weight balance and high center of gravity.

Do It Yourself _ Is Not _ All By Yourself Solutions!  Reverse Car Parking Stop

There is some disagreement in trailer building about how to weld-on trailer spring brackets (also known as spring hangers).   Some of you have sent questions about which techniques are best, especially