If you ever doubt the sanity of safety chains, then see this example of where a single trailer chain literally saved lives.  The story is amazing from all angles –– the accident, the rescue, those who rushed to assist!  There is one couple EXCEPTIONALLY thankful for that one trailer chain.

There are dozens of posts about the incident, so Google “Malad gorge bridge accident” to find stories and YouTube videos.  KKTV 7 in Boise did a great piece on the aftermath including photos the couple took as they dangled above death.  While the event is intriguing, I keep asking:  How did it happen?  What can we learn?  It’s terrifying to think about, and I can’t image living it.  I’m thankful they are out alive.

I grew up partly in Boise Idaho, so I’ve driven the highway many times.  I know the gorge location, and though I have not been directly below that point, I’ve been in the gorge.  It’s deep, and I can only imagine the terror of hanging by a seatbelt not knowing if . . . .  Not knowing one chain is holding their lives.

I’ve also done a bunch of rock climbing and even some minor rescue — nothing like these guys.  Looking into an abyss is scary enough when you’ve set the proper anchors and have good ropes.  Hanging there in a truck, well . . . . Wow!! is all I can say.

What Can We Learn?

Here at Mechanical Elements we’ve discussed a lot about Safety Chains, including wrongs of twisting the chains, and, of course, discussions about where and how to attach them.  It’s important to recognize just what’s at stake.  Like one comment I read about this accident, something like “I thought safety chain was to keep the trailer from getting away. . .”

On this site we also like to reason the “why’s” for understanding.  So, this article is not so much about the story of the accident, but more about what we can learn.

I’d love to know the whole story.  Maybe sometime in a police report, but it probably won’t give all the details.  That aside, let’s see if we can learn something from tidbits we have for this harrowing incident.

Focus On The Trailer Chain

In all the reporting, the one tidbit that captures my attention is the haunting thought of one chain holding lives from plunging into the gorge.

For the sake of learning, I’ve collected a few of what I think are the most telling photos.  We have some full images, then enlargements for focus.  Words on the images I’ve added to show points of interest.

Start with Image B, then the enlarged section below.  Take a close look at this enlargement (below) of the truck hanging from the bridge.  (I think credit goes to Special Operations Rescue Team Magic Valley Paramedic for these photos, but maybe the Idaho State Police.  The images repeat in many locations without credit, so it’s hard to tell.   Please let me know if I’ve got it wrong.) 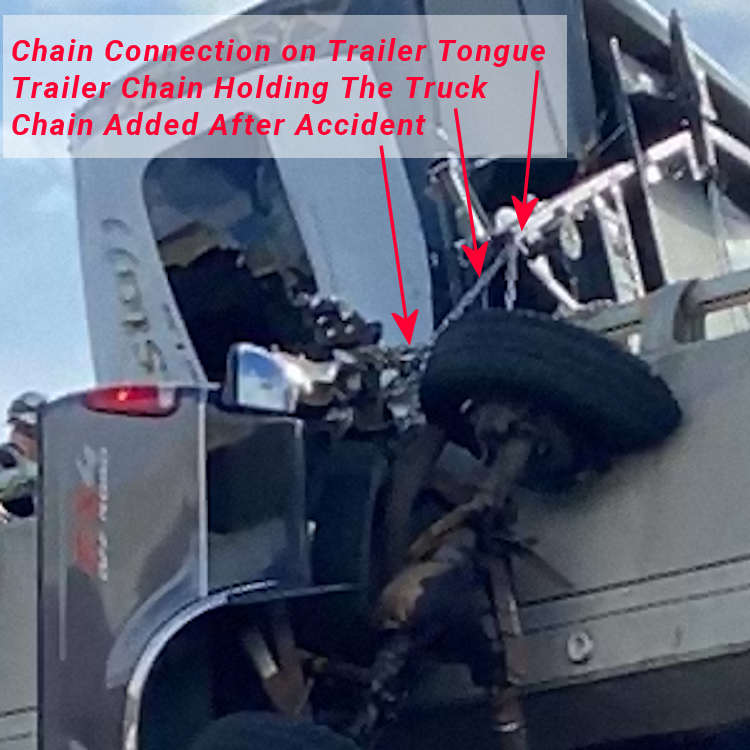 Now, from a second viewpoint of the truck hanging.  Image C.  Look at this one, then at the enlarged portion with notes below.

Finally, there is one more large image below that, showing a closer look at the hitch, and the saving chain from the “green truck” perspective.  It also shows the extra chains added for safety while performing the rescue.

Here are some things worth noting from these images.

What things do you see?

As noted above, here is an enlarged view of the top corner of Image C. 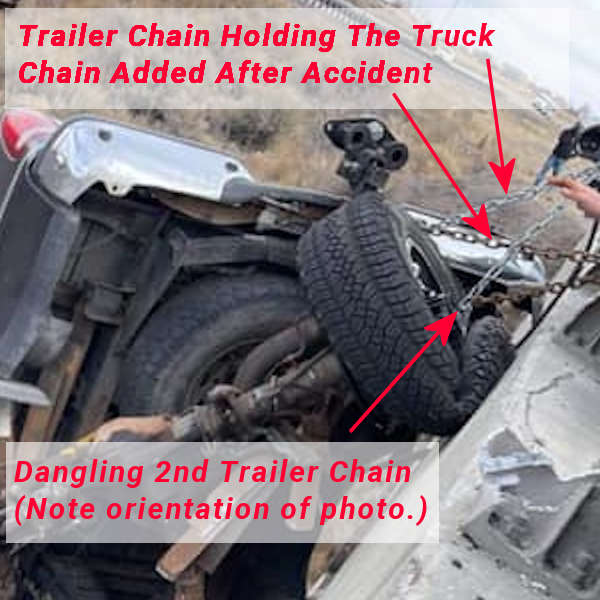 Finally this awesome image from Magic Valley Paramedics Instagram.  I think this is the most telling of all. 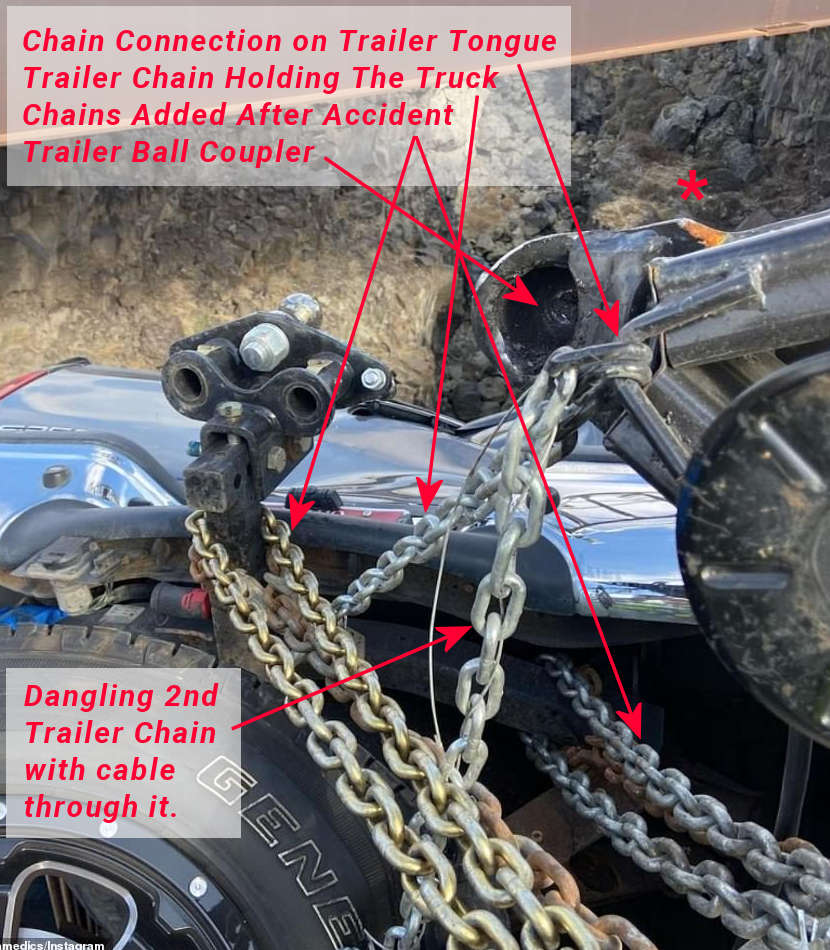 I love the many heavy, redundant chains added by the assisting truck driver for safety — after the accident — just in case.

First, in the chains image, you can see the hitch and ball.  Does the hitch have enough damage to say it was “wrenched” from the vehicle as it tipped over?  There is one flair area near the red * arguably as a witness mark.

Second, Image D shows a large dent in the tailgate.  Was it there before?  Even in the Chains image we can’t see much, so I don’t know if there are witness marks.  Did the trailer hit this?

Third, Unfortunately we can’t see the ends of the trailer chain.  Since one came loose, I’d guess they are open hooks — unless possibly the second chain broke?  But, we don’t see the chain distress as evidence it pulled hard enough to break.

Fourth, There appears to be a small cable woven into the loose chain.  Is that for the breakaway?

Warning:  The next sections of this article are speculation and supposition.  If you want facts only, skip those and go to the Take-Aways at the end.

OK, I understand it’s stepping out on a limb, since I was not there and don’t have any better information than images and news stories.  That said, here are some big questions.

Is a wind gust enough to cause the tow vehicle to loose control?  Of course it’s an additional dynamic, so serious it many respects.  See this YouTube Video of RV’s in the wind, especially starting around 1:17.  (Note the flag at 1:26.)

Having the wind alone cause loosing control the way it was described by witnesses seems odd — unless compounding with another factor.  Maybe over-correcting?  (He’s pretty experienced, so I’m thinking not.)  More likely the trailer load and balance are poor?  It doesn’t take much for things to get out of hand if system dynamics are only semi-stable.

The hitch disconnected at some point.  But, why?  Was it simply wrenching off as the trailer tipped?  Or was there more?  In the process, something hit that tailgate — high.  This is typical of a tongue having come off the hitch, and about right for the length of the chains.

Could a bump, perhaps combined with the wind, and a first swerve, cause the hitch to come off?  Perhaps it wasn’t all the way tight?  I’m sure the driver reacted in part with brakes.  If the hitch was already loose, then that can account for the sudden loss of control.  A loose trailer (attached only by chain), in a stiff cross wind, is very hard to control.

Also, somewhere in the thrashing process, one trailer chain came off.  Or did it break?  Good question.

Obviously, it’s total supposition, but what is the load distribution hitch on there for?  If that was once considered necessary, but not used this trip for whatever reason, that may be a good hint that the load balance of this trailer was not so good.  There’s not enough information to make that conjecture, but it’s an interesting question.

A 30′ trailer is heavy.  That long, even the light ones are heavy.  Assuming the hitch disconnection, certainly a trailer yanking back and forth would be enough to loose control.  Like the police maneuver of tapping the back corner of a vehicle to cause a spin-out, I’m sure that trailer has enough mass to cause it.

At some point with wind and violent oscillations, the trailer tips on it’s side — perhaps as the tow vehicle pitches sideways — the trailer goes sideways in the road.  So violent to get the truck over the side rail, then forces to break the axle mounts (and dragging the trailer on it’s side) are enough to absorb almost all the energy so when the truck went down, the single chain was sufficient to hold it.  I’d love to know if the second chain broke?  Or came undone?

Still, the impact on the trailer chain must have been immense!

We’ll probably never know what really happened.  I’m sure it was so fast and with such shock the driver won’t remember much.  Still, it would be interesting to look at the damage, the skid marks, and additional photos to learn.  To me, it seems the wind may have been the deciding issue, but other contributing factors — hitch loose, poor weight balance, or something — made the instability.

Again, I emphasize that I have very little for facts, but I don’t think wind alone is enough.  Yes, a trailer can tip over in the wind, but an accident like that would be different.  Wind gusts will cause crazy things, but unless the trailer has some relative imbalance (semi-stable), it should not cause total loss of control in such a violent way.  That said, imbalance can certainly be a contributor.

Witness interviewed for the news stories talk about loosing control, not about the trailer suddenly tipping in the wind.  It probably tipped as the truck pitched sideways going to the edge.

Safety chains don’t fall off in the wind.  There had to be some violent motion — before the truck went over the edge — to jump the hook loose.  Or, perhaps it broke?  All I can say is Wow!  I’m so thankful one chain is strong enough.

The electrical is clearly not connected.  I don’t see a breakaway switch, but the small cable is a tale-tale sign.  Maybe that’s part of what saved the day in scrubbing off as much speed as it did?  Or maybe that connection failed too?  (One end of the cable should still be attached to the tow vehicle.  It doesn’t work to connect it to the trailer chain, but that’s kind of what it looks like.)

Finally, I have no idea how far they went from first moment to final stop.  I assume they were traveling in the direction of the green truck — because it would be hard to turn him around.  That means the trailer was sliding on it’s side, top first, as the truck went over the rail.  Who knows, maybe it was the expansion joint at the start of the bridge that set things in motion.  That seems like a very fast stop, and the driver did say he tried to get it under control.  Well, interesting thoughts.

While there is benefit in learning from observation, too much supposition just clouds the water.  So, let’s come back down and focus on some learning points.  There’s not much definitive from this accident, but I think it gives a strong exclamation point for these reminders.

We’ll call it good for this article.  Hopefully you will think just a second about this story when you hook up next time.  Trailering is actually very safe, and even safer when you act smart to bias the odds in your favor.

When To Replace Trailer Tires You Don’t Have The Plans I Need. Now What?

How Much Can I Tow With My Vehicle?

There are 3 main factors with how much you can tow.  While it all seems simple, digging in makes it a little less clear.  Yes, it’s easy to look at the simple rating numbers,