Over and over we recommend:  “Don’t use torsion axles in tandem because they don’t load-share”.  Well, What if we make them share?  Here’s a new design that brings the benefits of a torsion axle to the tandem axle party — with a ride smoothing effect to the whole trailer.  And, they share the load!

If you’re following the past few posts about a new trailer at Mechanical Elements, then you’ve seen hints of this torsion axle setup in tandem.  Now the prototype is running and testing has proven that it works very well.

Why Design For Tandem Torsion Axles?

In the list of “undesirable characteristics” both types (single axles) have somewhat of a harsh jostle or bounce.  When towing a trailer, bumps are felt through the hitch to the tow vehicle.  It is less, for a torsion axle when loaded, but it’s still there.

In tandem, leaf spring style axles smooth the ride considerably, because they compensate as they share the load.  However, because torsion axles do not share load well, we don’t recommend using them in tandem.

This new design starts with the question:
What If We Make Tandem Torsion Axles Share The Load?

The premise of the design follows the railway (and over the road trailer) ‘axle truck’ paradigm.  It’s a hybrid of Center Pivot and Torsion.  Basically there is a pivot point in the center of a rocker beam with an axle at each end.  The center pivot connects to the trailer frame.  When the front axle encounters a bump, the rocker beam pivots one way then the other as the wheels go over it.  Because connection to the frame is through the center pivot, loading on the axles is always equal.

As a wheel goes over a bump, it moves the trailer frame only half the height of the bump.  Or, in a dip, half the depth of the dip.  With the wheels undulating the road surface, the ride of the trailer is smoother.

Since the rubber suspension of a torsion axle responds pretty well to sudden inputs, they take up some of the response.  The trailer frame then moves less than half the bump height.  And, the faster you go, the more the rubber will absorb, so the ride smooths even more.

Images here show the ‘axle truck’ design with a torsion axle placed at each end of the rocker beam.  The wheel centers are equidistant from the main rocker beam center, and the axle beams mount appropriate for position of the trailing arms of the tandem torsion axles.

More Value In The Design

It looks like a lot of ‘stuff’ under the trailer, but axles mount above the beam, so it does not make the bed high.  And if that’s not enough, this design has two mounting heights.

As mentioned in the post on Economics of DIY Projects, special parts often require extra cash.  The special parts here are mounting plates and axle attachments.  You can see them in the photos.

The biggest trick / biggest concern in building the suspension system is alignment.  If the axles are not spaced perfect, or if they do not run true and parallel, the suspension will fail, tires will wear, and problems will arise even if the general concept is a good idea.  Execution is key.

To accomplish the alignment and consistency needs, we chose to make parts via water jet cutting.  The design uses flat material cut with shapes so everything aligns.  The CNC nature of the water cutting makes the parts consistent, which certainly helps in making everything align.  Then it’s up to the build techniques.

Here’s a video showing some attention to alignment while building the rocker beams.  Parts from each side of the trailer are built together and aligned together.   Bolts and clamps join everything for welding and machining, so they match.  Extra care while building these components will pay big dividends.

After welding, some adjustments are made to compensate for the induced stresses of the weld.  This video shows how that is done for the Pivot Anchor piece that attaches to the frame.

Excitement in the project, and especially in success of the first test run, prompted this early video.  You can see the big clamps holding the suspension in place, since we want to be sure before permanent mounting.

That first test drive and the video helped a lot with feeling that the design was right.  For pulling an empty trailer with full tire pressure it was actually impressive.

Subsequent testing also gave a lot of great insight.  Check this second video of testing the trailer rolling over curbs.  In this case, the GoPro camera (much better than the phone) along with freeze frame editing gives a much better view of suspension action than the early video.  The GoPro view from under the trailer helps too!  Check out both video’s.

The big test came as we towed the trailer to Moab Utah for a mountain biking week with a bunch of friends.  The trailer performed perfectly, and was awesome for carrying bikes to each of the big rides.  Experimentation with tire pressure gave an almost perfect trailer ride.  With a lightly loaded trailer, you will typically feel the trailer bumping through imperfections in the road.  However, with this design, combining rocker beams with tandem torsion axles, and setting the right tire pressure, the trailer virtually disappears at speeds over 40 mph.  It made a very pleasant trip pulling the trailer.

How Can I Get One?

Several readers requested plans for the tandem torsion axle walking beam suspension described above.  Blueprints are now ready in 2 size capacities:  A 2000# up to 4200# version of the Walking Beam Trailer Suspension;  and a 5000# up to 8000# version.  The plans are complete, and give the options for any total capacity in the ranges listed.  Available for immediate download right now in the plans store.  Enjoy.

What Is The Right Trailer Tongue Length?

How long should a trailer tongue be?  Is there a standard or is it totally arbitrary?  Let’s get some answers on this fun trailer tongue length topic.

Do they accomplish the intended purpose?  Or are trailer safety chains just a legal pain in the rear?  Maybe the better question to ask, since we’re required to use them:  “How do we make the chains more effective?“

There are many different sizes and shapes of the suspension equalizer link.  What are they for?  Better yet, when should I choose one shape over another? If you’ve read much on this website, then you know

Did You Build It? 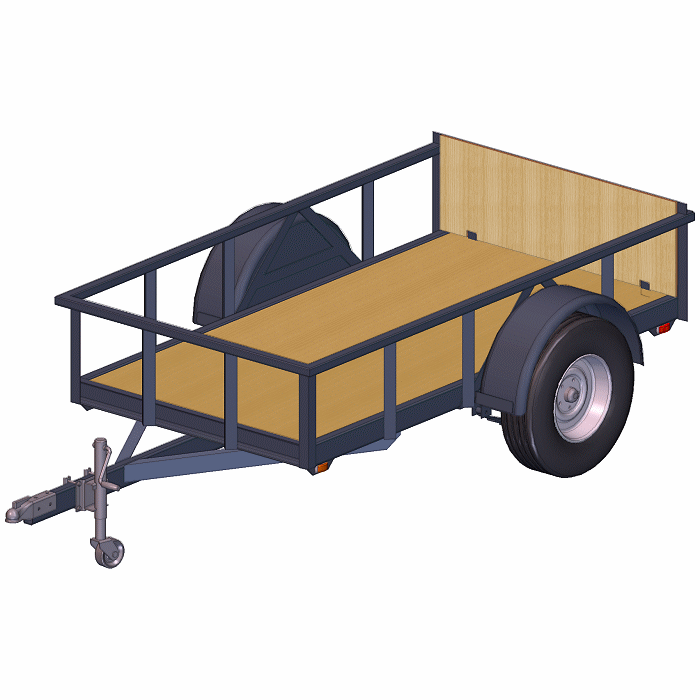 A small-ish, yet really tough little trailer.  Get these single axle 4x8 Utility Trailer Plans to get the jobs done.  With a total capacity of 3500 lbs., trailers built from these plans will work hard.

More new plans, and even more coming.  You’ve been asking for robust Deck-Over Trailers, so that’s what we’re working on.  Now they are here, and we’re not talking about another “Me Too”.

It’s time to welcome the tilt top trailer.  You, as customers and readers, request this a lot, for a while.  So, now we have it.  Rather than revisiting the design for all our trailers in all the sizes, we now…

It all rides on the trailer axles, so get them right.  Here are some common technologies (and misnomers) for tandem axles and other multi-axle trailers.

When there’s a need that doesn’t really fit with existing products, make your own.  That’s it with this new, tough Shop Floor & Utility Cart.  While it’s not monumental in design, it does have some great functionality for DIY’ers, with…