Should you twist trailer safety chains to make them shorter?  Certainly twisting them up will help set the length so they don’t drag the ground.  That part is good.  Then, what are the issues with twisting safety chains?

Following on to the previous post about Trailer Safety Chains, we’re going a little deeper on a technique that is pretty popular, but hampers the stated goal of chains in the first place.  If you get the idea I don’t like twisting chains, then you’re right.  As an Engineer, it caught my attention and it definitely rubs my senses wrong.  Let’s look at why.

What Does It Matter If the Chains Twist? 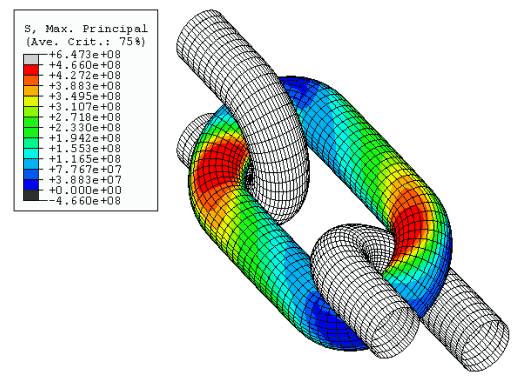 Let’s first look at what happens to chain links under load when twisted.  Here is the mild case first.

I found this rather cool study, Effects Of Twist On Chain Strength.  Their purpose is specifically for marine applications on big chains, but the nature of the study applies.  They model chain and study the stresses, then to verify, they test actual chains.  Fortunately for us, they used smaller chain in the tests.  And though it was minimizing for their purposes, it suits us great, because they are closer to the sizes we use.

This study examined chain twist up to 29 degrees — like shown in the image.  This Finite Element Analysis, FEA, does indeed show higher stress due to twist.  Interestingly, their actual breaking tests (where they pull the chain until it breaks) also show a decrease in strength as twist angle increases.  However, the decrease is less than 5%.  Basically, no real or worrisome decrease in strength.

So, if there is no significant decrease in strength, why is it a problem?

Read this story about dangling above death by a single trailer chain and ask yourself if 5% means much?

The above study and example are excellent for understanding that it does not really matter if there is a little twisting in the safety chains.  That’s good news for us because we don’t have to get them perfect when we hook up the trailer.

On the other hand, this is not what we normally think about when we talk about twisting safety chains.  The above study did not evaluate chains with a severe twist — to the point of overlapping links.  Twisting the chain up to 29 degrees does not shorten the chain.  Let’s look closer at a photo.

This image shows a great example of twisting safety chains for a trailer.  The twisting is not incidental nor accidental, it’s deliberate to effectively shorten the length.  By having the links twist or “stack” up or overlap on each other, the chain becomes shorter.

Maybe you did this on the playground swings — twisted the chain all up so you could “spin”.  Well, the trailer won’t spin with the twisted chain, but it will definitely add significant stress.

Compare these chain links to the FEA image above.  The twist of their studies did not allow the links to pull on top of each other, so the primary forces still act mostly linearly along the chain.  However, in this twisting image, the links stack, so the primary forces are not linear along the links.  Rather, they develop bending moments trying to unwind or permanently bend the chain links.  This type of bending applies much higher stress to the links so their effective strength is significantly less. 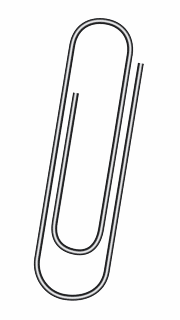 Any load member in pure tension is much stronger than a member in bending simply because the affected stress area is consistent.  Think about a paperclip for example.  It is easy to bend, but if you pull on the straight wire, by hand, we don’t have the ability to break it.  It’s just a small wire, but it easily illustrates the difference between bending and tension strength.  We want trailer safety chain links in tension, not in bending.

Another interesting example:  It is said in the old days that criminals would break handcuffs by twisting the chain severely.  I can’t verify the truth of the story, but that’s the lore.

Don’t get this wrong.  A chain link in straight pull also has bending forces, but it is limited to the curved area of the link, and it’s symmetrical.  Chain links on a twisting chain have those stress too, but add on top the bending and twisting stress of pulling in a non-straight direction.  It’s an unneeded strength reduction.

Update 2020.  Now let’s drive the point home with this testing example from YouTube.  Thank you Bao (from the comment below).  The video shows a lab test pulling chains to break — one that is straight, and one twisted.  They have a severely twisted chain (like some trailers do), and it breaks with approximately 30% of the force!  That’s much weaker than I would have thought.  His test says you loose about 70% of the chain strength by twisting it all up!  That’s HUGE!  (Watch the chains as they break to see how they fail.  I find it fascinating.)

It’s Not All About Stress

The purpose of safety chains is to restrain a trailer if the unthinkable happens and the hitch comes loose.  I suppose it’s not really unthinkable because it happens, way more than it should.  Anyway, once the trailer is free from it’s hitch, the chains are all it has to keep it guided.

If the liberated trailer decides to turn, it is restrained only by the chains keeping it from going too far.  Or, if it is slowing faster than the tow vehicle, it will pull along — by the chains.  On the other hand, if you are trying to slow it down, it will slow either by crashing into the vehicle, or by the safety chains as the tongue pushes under the vehicle.

The ideal case is going up a steep hill where you can stop safely, and quickly.  Unfortunately, it’s more often the later where the trailer relies on the tow vehicle to cushion its stop.  The trailer may sway side to side violently.  It (and the boat / camper / etc.) may flip or destroy itself.  The trailer may crush the back of the tow vehicle.  Usually it is not pretty.  Hopefully you have Breakaway Brakes to help it all end quicker.

In all of the scenarios, there are high and violent forces when the trailer diversions reach the end of the chains.  And, the longer the chains, the further the trailer can go off-track, which usually means the impact at chain catch is even higher.  Certainly, shorter chains improve control and minimize damage in every case.

Finally, if you are able to position the safety chains in the perfect way so they cradle the tongue as advocates like to say, then that’s the best of all scenarios.  Again, that does not usually happen.

The Effect Of Twisting Safety Chains

What happens when a chain is twisting as in the last photo (video link) below?  When you hook up the trailer, it looks great.  The chains are all neat, and it looks fantastic.

What happens when the twisting safety chains experience a sudden, forceful jerk?  Actually, they lengthen, considerably.  Think about the scenarios above.  Think about what happens when the tongue digs into a hole or crack in the pavement.  The forces, even if they are not enough to permanently damage the chain, will in fact pull those links to their extent — which is much longer than the twisted chain at hitching.  In that way, you loose some of the shortening effect of twisting safety chains.

The above discussion entertains the effects of forces creating stress in the chain links.  If those stresses are high enough, the links will bend and lengthen the chain even more.  Admittedly, if you have the correct Class of chain for the GVWR of your trailer, it’s not likely that even a twisted chain will break, because they have a generous safety factor.  However, it won’t give you the trailer restraint you will wish you had in that circumstance.

This puts some emphasis on getting it right whether you build a trailer or if you buy one.

There is some good and some bad advice going around.  In this YouTube video from U-Haul they first show a great way to shorten a chain by pulling the chain through the hitch loops then connecting it back on itself.  Just make absolutely certain that the hook won’t come out.  For many hook types, this won’t work.  (Personally I don’t like these open hooks, or the rubber retainers, but that’s another discussion.) 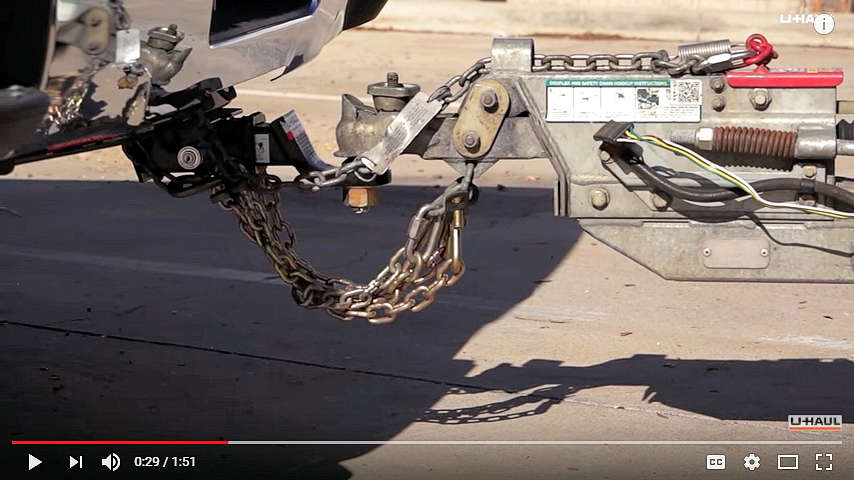 This video also shows an excellent example of an effective final chain length.  Also take note of the breakaway tether adjustment they mention.  Many light trailers don’t have it, and most are a small cable instead of a chain, but the idea is well presented.

On The Other Hand

I don’t normally call people out, but this video also shows, and promotes twisting safety chains in a big way.  It’s so wrong on many levels.  I point it out because U-Haul handles trailers, and they are in an authority position, but this practice — and especially the promotion of it — is careless and irresponsible.  Yes, it keeps the chains from dragging on the ground, but this whole article is all about why it is a bad idea. 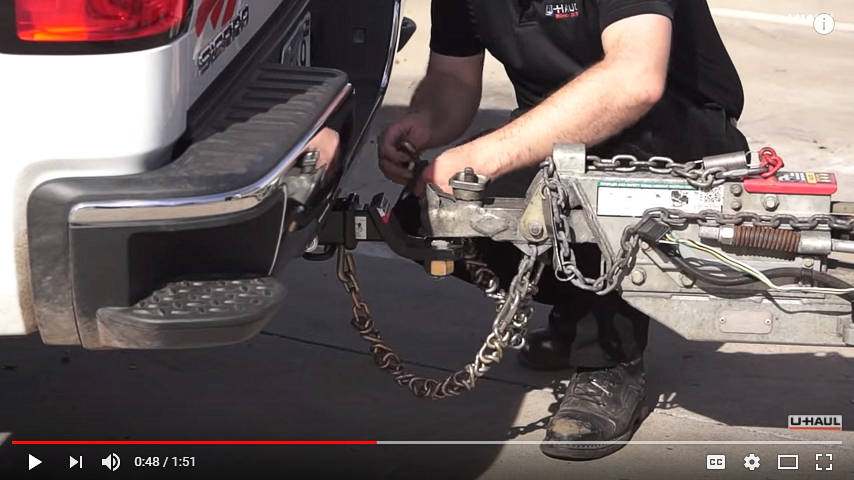 The next safety devise to read about is the Trailer Breakaway Kit.

Trailer Safety Chains? Trailer Build: Where Does The Axle Go?