A shop press is a fantastic tool, and when you need it, there’s not much that can really substitute.  On the other hand, we need to keep things in order because when things go bad, they can easily go really bad in a hurry. While that’s not the norm, in this post we’ll look at making the most of your press.  We’ll also cover longevity and fixing a workshop hydraulic press.

As great as they are, a press not the kind of tool most people need — or even want — very often.   However, when you have a project that needs one, then there’s not much to substitute.

So what are the 4 Pressing Issues?

Of course, this article is about the press, but it’s worth noting there are potential substitutes — like a big hammer — for some situations.  In all the techniques of applying force, we need to think not only about results, but the potential for damage — or even disasters.  So, let’s talk more about each item above, one at a time.

I have a great workshop hydraulic shop press, yet most of the time it sits idle.  I built the 2-Post Press that we sell in plans — with a 30-Ton jack for movement.  I’ve had it for nearly 20 years, and it’s been wonderful.

My favorite memory with the press:  When my kids were little, they used to find pennies and bring them to the shop and beg to squish them.  OK, I’m not supposed to admit to defacing currency, but the kids just loved putting in a penny and pulling out something bigger.  So Fun.

Back to the topic — Since we don’t use our presses that often, sometimes they don’t get the attention they need.  I pulled out mine the other day to press something, and it didn’t want to work.  Disappointed, I decided to take it apart to see what was wrong.  Here’s a video of the tear-down.

In the end, the press squishes again.  That’s a partial success, because it’s not perfect, and where the debris came from, I’m sure there’s more.  So, first issue is to make sure it’s working.

The line of action from the prime mover, through the workpieces, and on to the press reaction member is important.  Keep these all in line so the forces are on center, and it’s much less likely that something with exit in a hurry.  (Fly across the room.)

There are 2 parts to this one.  First, it’s a safety concern because if things are NOT on center, bad things can happen and in a hurry.  Second, keeping things centered assures pressing forces are direct into the objects, so things move as smoothly and even as possible.

If you’ve ever pressed on a pin (for instance) that was not quite straight with the line of action, then you know that pin might not every be straight again.  Likewise, when pressing in a bearing, if it’s not straight, you can bugger up the whole thing pretty quick.

If there’s one thing I’ve learned with this 30-Ton press — it makes things move even when they’re wrong.  Yes, it’s a simple workshop hydraulic press, yet it doesn’t really care if things are straight or not.  It’s so powerful that you think things are moving smooth even when they are not.  It’s really great to have all the force available, but you have to make sure things are set right, or they’ll forever be wrong. 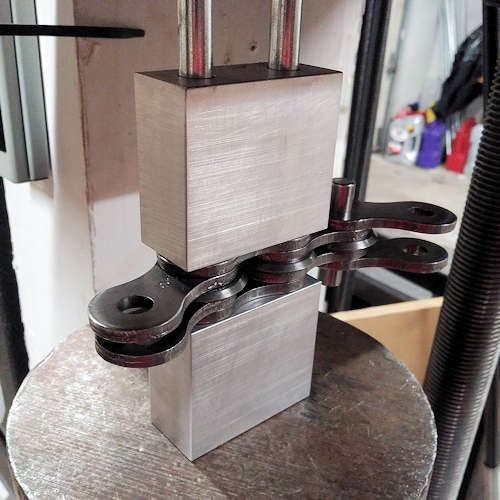 TIP:  Read our bit about the different kinds of force application.

One of the best ways to accomplish #2 is using a jig or fixture to hold things.  Using a jig for your workpieces can sure simplify life — especially if you need to do more than one of anything.

The image here shows a nifty fixture used to press the pins out of that chain.  While it looks good, and it mostly works well, yet after only a few times pressing, the bolts bent.  The two pins in the top are actually bolts — which seem good, but no — failure.  While bent bolts can be fun to look at, they don’t make very good press pins.

The pins are hardened, strong steel, so softer bolts as press pins should be good for avoiding problems, but they were not.  The next step is using much stronger steel — Grade 8 bolts, and that takes care of the problem.

TIP:  Sockets (from your ratchet set) work really well for spacers and temporary jigs.  I use mine a lot because they are round, come in lots of sizes, and offer a nice perpendicular plane for pressing against.

Like a lot of tools, the workshop press — particularly a hydraulic press — just needs respect.  When we think about them providing the force of a freight train on our work, that’s a moment to give some respect! 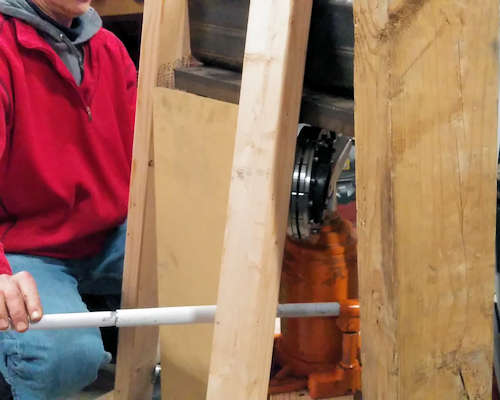 Hopefully you don’t get the experience, but when something gives with that kind of force, then things fly.

Whenever we are in doubt, we put something up as a form of protection.  In this photo, it’s a bunch of boards resting against the press.  The operation crushing something, and we absolutely expected some pieces to fly.  Our expectation was the pieces would be relatively large, so spaces between the boards is OK.  And, that’s pretty much how it turned out.

Adding something between you and workpiece is often a good idea with a DIY workshop hydraulic press.  Most industrial presses have elaborate shielding, because it’s that important.  Just because we’re DIY and don’t use it very often does not mean dangerous things won’t happen.

As a side note, one of the reasons I really like that pump up jack — I can go really slow and I can feel (a little bit) what’s happening.  I do like the powered pumps for their speed, but then you lose the feel for what’s happening.

Why a Workshop Hydraulic Press?

OK, I’ll admit it.  While a Shop Press is not on the essential list of needed tools, it’s very useful for a lot of things.  Yet there are also workarounds.  A good set of punches, an anvil, some good sized hammers, and things to use for spacer blocks can get the DIY’er through many things.  However, a hammer is not the most graceful. 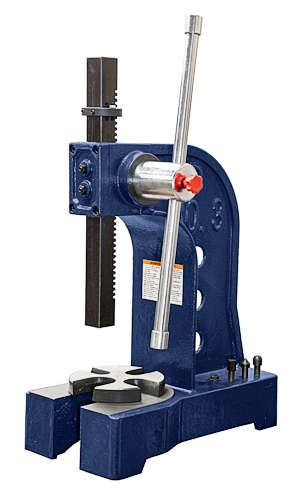 Another option — one I also use a lot — is the arbor press.  These come in a bunch of sizes, and for smaller things, they are faster and easier to work with.  The one shown is from Palmgren.  As nice as it is, my 3-ton arbor press (similar to the one shown) has been insufficient on many occasions.

The right tool for the right job.

A few years ago we set out to design a stout shop press that is smaller, and less expensive.  The one in the images above is based on a hydraulic jack for those “not so frequent” times when you need workshop hydraulic press.  You can read more on the product page and even buy plans if you want.  For those people wanting more, we also have a bigger size.  Both will do up to 50 tons.

As in the video, I don’t use it that often, but once in a while, there just nothing else to accomplish a job.  For example, the pins shown in the press (top image), are exceptionally hard — even one at a time in the arbor press.  A hammer works, but makes a mess of the pin.  However, with the hydraulic press, we can do them 2 at a time with no problem.

The right tool for the right job.  –  Have a Wonderful Day!

Are Aluminum Trailers Good or Bad?

Trailer Axles 101 – What You Need To Know

I’ll just drop by the parts store and grab an axle . . . . Well, trailer axles are not quite that simple, but knowing a few important details, we can certainly get the right one.  Here’s a quick guide…

Sometimes, despite your best efforts, holes you drill for a project don’t quite align with those in the mating parts.  It’s maddening, and sometimes you feel dumb because it’s messed up, but there are ways to fix

This post is a question from an engineering student wondering about trailer frame materials selection and safety factor.  His analysis shows a material thickness that “does the job” is much less than his welder associates recommend.  Wondering about why, he…

What is Your DIY Legacy?

Who influenced your creativity and Do-it-Yourself enthusiasm?  Was it your dad?  A shop teacher?  Or a neighbor that was into cool projects?

The beauty of a gantry crane is the beam overhead, and the clear access for lifting things.  To make them more useful, telescoping legs put the top beam at a height appropriate for the job — in your garage, or…

Tips To Set A Trailer Tongue At The Frame Center

When building a trailer, there are a bunch of things we want to get right.   Here is one.  “How To set a trailer tongue properly, and central on the frame“.  Intrinsically this is easy to grasp, but maybe not as… 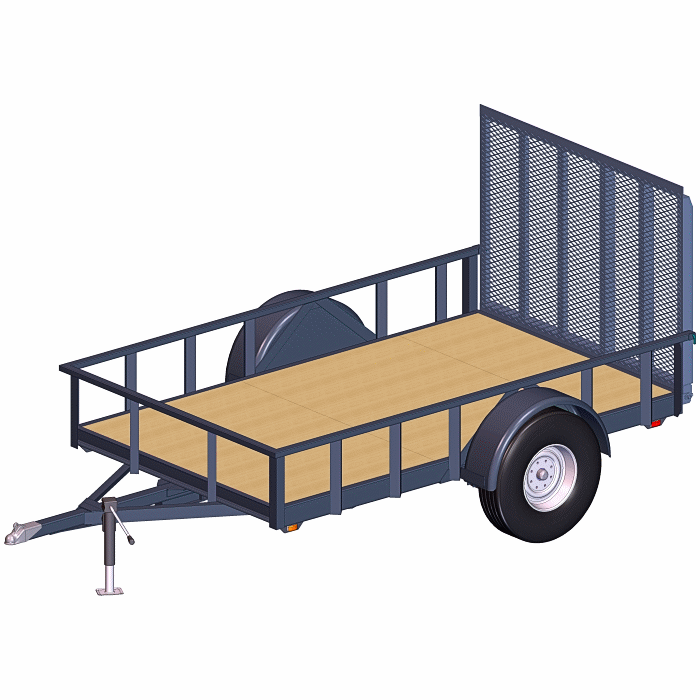 For all the jobs a utility trailer must do, these plans include so many options for both function and utility.  At 6+’ wide 10’ length, this design also includes an axle option for 6000 lbs or 7000 lbs. 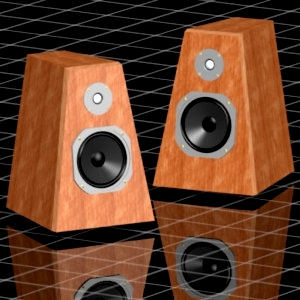 Form follows function in this attractive, modern speaker cabinet.  Yes, it looks cool, but more importantly, all the non-parallel internal surfaces resist resonances for a beautiful and dynamic sound.