When we think about airplanes flying, or boats sailing, it’s easy to imagine how they move.  An airplane rolls some as it banks into a turn.  A boat pitches up and down with the waves.  So, how do these factors — Pitch, Yaw and Roll — apply to trailers and towing?  And really the bigger question:  Does “Trailer Attitude” even matter?

What Are Pitch, Yaw & Roll?

There are 3 terms that define the “Attitude” of a vehicle.  The classic way of thinking about them is with an airplane or a boat because it’s easy to visualize.  Here are some excellent image bits from the website Hackernoon with reference to quad-copters, but they apply to all vehicles.

Pitch is the front to back comparative elevation of the vehicle.  Think of it as the front being up or down with respect to the back, creating an angle to the direction of travel.  A boat going over a wave is a great illustration.

Roll is the side to side elevation or rocking of the vehicle.  You can think about it as “leaning” to one side, or perhaps as banking into a turn.

Yaw is a little more difficult to think about, but you can almost interchange the word “drift”.  When you think about sliding a car somewhat sideways like on a slippery surface, drifting, that’s really Yaw.  It’s when the vehicle orientation is not straight with the direction of travel.

So, how do these attitude concepts even apply to a trailer?  Hey, the trailer is attached to the tow vehicle, so it can’t go too far — Right?

True, but remember — just because we’re talking about them doesn’t mean it’s all bad.  What would it be like to fly an airplane without banking into a turn?

First, let’s look at Pitch for a trailer.  It’s the easiest to spot, and arguably the most common trailer attitude.  We expect a trailer to pitch — like the boat going over waves.  Since there are bumps and divots in the road, we want it to pitch with the undulations in terrain.  Just like waves, we want enough clearance so the trailer can pitch without hitting.  See the article about approach and exit angles.

Movement with the terrain is a good, but more often, with pitch, it’s the hitch.  Looking at trailers as they pull down the road, it’s easy to see those that pitch up, down.  (Nose tilting up, or down.)

Since it’s probably impossible to make it tow perfectly horizontal, are there any negative effects?  Yes, 3 important ones.

Though it’s a good idea to understand it, honestly, this is not that big of a deal unless the pitch is extreme.  However, if you travel at higher speeds or if the load is not well balanced, the negative effects are greater.  And, it’s all a matter of degree.

So, pitch because of the hitch is very easy to correct.  They make lots of draw-bars with various drop and lift distances.  Here is a photo of a drop hitch to correct trailer attitude. 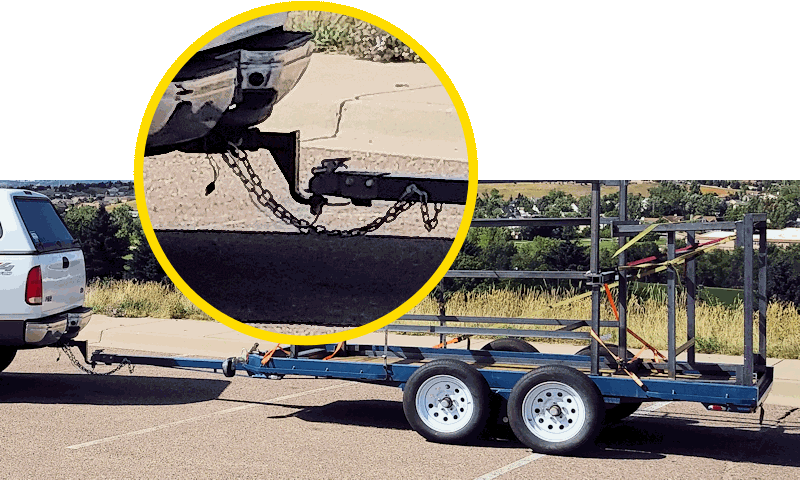 Given the choice, is it better to pitch up (front) slightly?  Or to pitch down?  As mentioned, it’s nearly impossible to pull the trailer perfectly horizontal.  So, a pitch down slightly will cause (at speed) a little aerodynamic “vacuum” under the trailer which will increase stability — slightly.  If you travel with the trailer, a small pitch down is good.  On the other hand, if your trailer is low, and bringing the hitch down causes trouble with hitting the ground (going in and out of parking lots or steep driveways), then raise it a little.  A small pitch up in the front won’t hurt anything if speeds are relatively low.

Often we think of Roll as a dynamic effect — something that happens as we turn a corner fast.  That is certainly true, yet it can also be static.  For instance, if one side of the trailer has different size wheels or tires, or if one side is loaded heavier than the other. 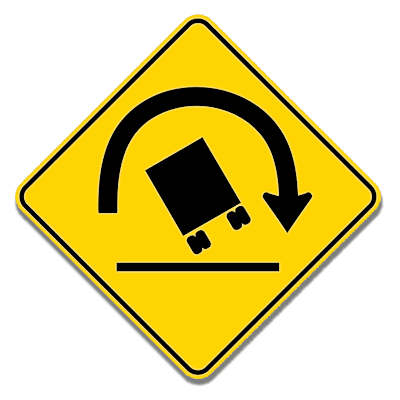 In almost all cases, Roll, as a trailer attitude is a bad thing.  We don’t want our trailers leaning as we go around a corner, and we definitely don’t want them leaning because of uneven loading or mismatched wheels.

Tire pressure is one of the most common issues causing roll.  When tire pressure is low — especially if it’s on just one side — the trailer can roll side to side much more.  This can cause some extremely dangerous situations — both for control, and for tipping.  (Obviously, this is when the trailer has a load, because low tire pressure can be a good thing to avoid bounce when empty.  Just make pressure right for the load, and when it doubt, fill to the tire recommended pressure.

The static solutions for roll are straightforward.  Make sure the wheels and tires match.  Always keep the air pressure proper, and the same for all the tires.  Don’t forget the spare tire, too.  Change out springs or torsion axles if one side begins to sag.  Definitely fix broken shackles or other parts than may cause the trailer to lean.

Dynamic solutions are also pretty easy, and common sense.  If your trailer leans (rolls) when cornering, slow down.  When you are on uneven ground, take it easy.  If you must carry a drastically uneven load, be super cautious.  (Though, it’s better to figure out a way to place the load central.)

Finally, secure your loads.  Roll becomes particularly dangerous when it’s caused by something moving around in the trailer.

This trailer attitude is a little harder to spot, more dangerous, and also more difficult to correct.  Unfortunately, it’s also far too common.

Have you ever followed a trailer down the road and thought it looked like the trailer was tracking off to one side?  It gives the impression of a dog running — when the rear legs are just off to one side from the front legs.  That works for dogs to avoid hitting the front legs with the back in stride, but it’s not good for a trailer.

The issue here is usually alignment.  It could be axle alignment with the frame, or axle to axle (for multiple axles), or alignment of the hitch.  A bent axle, a bent rim, or poorly mounted wheel can also cause yaw issues.  Funny thing about trailers, they like to follow the tow vehicle in the easiest way possible.  So, if the axle is not on straight, the trailer will follow — but off to one side.

Yaw is not a desirable trailer attitude because it can cause a bunch of instability issues, especially in combination with roll.  If the trailer is not tracking straight down the highway, it will find it’s balance.  However, when you disrupt the balance by turning, even a little bend in the road, the trailer will seek a new balance.  That change because of a shift of weight by centrifugal forces, can be disconcerting.  It’s another reason why a trailer may wander or waggle behind the tow vehicle.

As mentioned, Yaw is a little more difficult to find and correct.  Let’s take it one step at a time.

For a good DIY trailer that you build, there’s no reason for Yaw.  Please, take time to be sure the tongue mounts correctly and the hitch is central to the trailer.  Set the axles perfectly straight to the frame — and with respect to the hitch.  This little bit of extra effort will pay big dividends with a wonderfully stable trailer.

Now you know a little about the attitude of your trailer.  It’s not that hard, and getting it right makes the trailer much nicer to tow.  A little knowledge is just the first step, however.  The next steps are the doing.

Continue reading with a great video and review article about Trailer Sway.  That article goes into the dynamics of where the trailer attitude goes out of control.  Good luck with your projects!

As a convenient way to help with safety, trailer hitches, balls, and receivers have categories or load rating groups called classes.  Each trailer hitch class has ratings for how much it will carry.  A look at the ratings for each…

The Little Things Make All The Difference

The trailer hitch and surrounding hardware are OH so important — with safety as the priority.  Here are examples illustrating one success and one horrific failure.

Do You Have Plans In Metric?

Virtually everything on the internet is by definition “World Wide”.   Even though Mechanical Elements (Synthesis Engineering Services) is physically located in the USA, we have a world audience, so it’s a fair question

Which Welder To Buy?

I’m looking to build one of your trailers, but I need to know which welder to buy?  What type, and do I need 110 or 220 volt?  What about other projects from your site that may pique my interest? 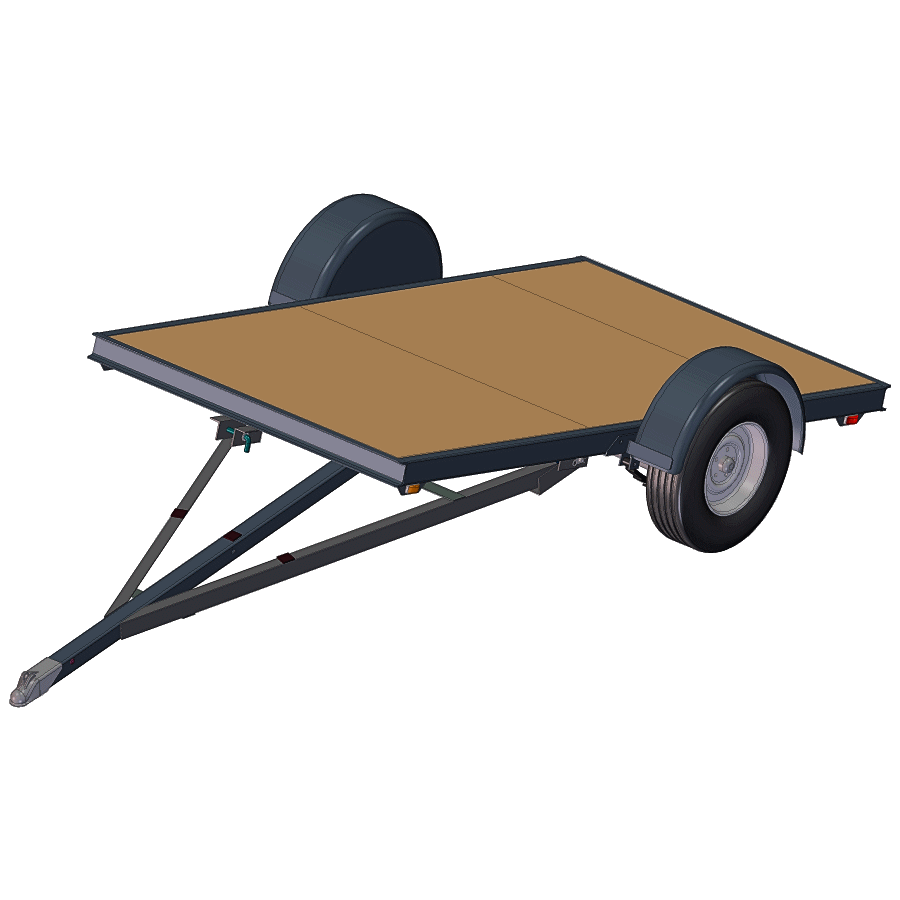 Convert our standard Utility Trailer Plans into a Tilt Top Trailer with these Conversion Plans.  It fits our smaller, 3500 lbs, utility trailers in 4' width and 5' width — for both leaf springs and torsion axles.

Shopping online is both a boon and a bust.  It’s great access to a wide variety of components, but it’s a bummer when misleading info causes extra work and frustration.  That brings us to this Customer Story of misguided

Do you believe the old saying  “Necessity is the Mother of Invention”?  Well, I have a need, but I don’t need an invention, just a quick solution.  So, maybe Necessity is really the Mother of Creative Solutions!