Do you need to weigh something really heavy but don’t have access to an industrial scale?  How can I weigh heavy things — like a trailer frame — without a special huge or super heavy duty scale?  Answer:  With some physics and a little math.

When we look at “Where Does The Axle Go” and other great construction objectives, often it is not so convenient to haul things down to a truckers scale to measure weight.  Sometimes the item is not mobile enough to easily haul it.  So, what can we do to weigh these heavy things?  There is always a clever way or a hack to help.

Here are some tricks, and though they are not super accurate, they yield a reasonable answer without needing a special industrial scale.  The catch?  They require a little math,  Oh, and accuracy of the answer is subject to your care in setup and measurement.  We’ll use two examples, including a video showing one way to weigh a trailer.

What Resources Do You Have?

When I first got married, my in-laws sometimes called me McGyver.  I suppose it fit somewhat because figuring out how to accomplish something with whatever you have laying around is just part of what I do.  I grew up in farm country, and farmers don’t run to the store for every little thing.  They figure it out, and make due with what they have.  Scavenger Engineering.

So, the first thing in being able to weight heavy things is to find resources.  Westley from “The Princess Bride” did the same thing when he asked “. . . And our assets?  Inigo:  Your brains, Fezzik’s strength, my steel . . .” 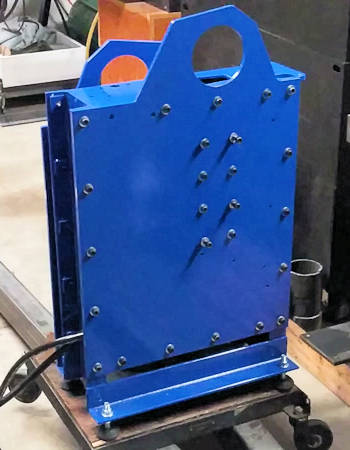 Hopefully your resources include some lengths of steel (or wood beams) along with a “push-button brain” (calculator).  Hopefully too, a scale of some sort – even a good bathroom scale will work, or maybe something bigger (strength).  A typical bathroom scale goes up to somewhere around 300 lbs, and that can be enough with levers and tricks.  We’ll use it with the same principle as a wheelbarrow . . . “I mean if we only had a wheelbarrow, that would be something.”  (Princess Bride)

Measuring or estimating weight is a pretty big part of finding weight proportions — like for calculating axle position.  For things like tongue weight, load weight, axle load on trailers, and even shipping weight (as the example we’ll use here).  It would be great to have a big scale as the right tool, but that’s not very common in a DIY shop.

Just like the wheelbarrow, there are tricks to move heavy things without actually carrying them.  We can use the same concepts to weigh heavy things using a smaller scale.  By setting up a lever system to support the heavy weight, then calculate portions from something cheap like a bathroom scale.  Yes, some math, some careful measurements, and some logic are all here.

And some tricks, like to for larger objects — like to weigh a trailer — measure one side of the trailer (then double it) can give a good estimate.  (If things are symmetrical.)

See the photo above.  The big blue thing is a machine for a customer, but I need to know what it weighs.  A guess of 500 lbs is not accurate enough, so we make a simple contraption to weigh it.

The starting weight guess puts us in the ballpark, then we choose levers.  For easy understanding, we’ll look at this simple case first, then expand the discussion below for other situations.  So, first, let’s look at the theory with the help of this diagram. 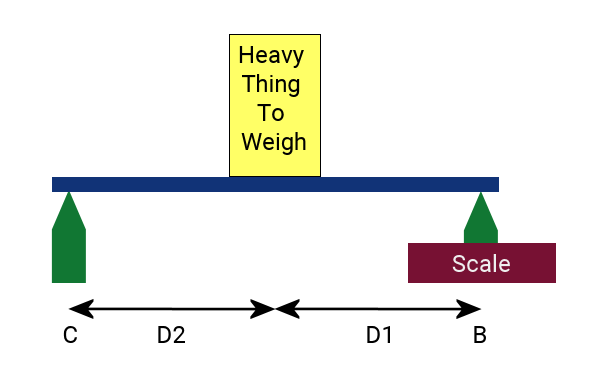 If the load is center (meaning D1=D2) between the supporting points, then each end of the beam holds half the weight.  If one end is a scale, then we can read the weight, and double the number for a total.  This works if the scale goes to more than half of the total weight (like the guess of 500 lbs) for the machine.

So, we set steel bars with a fulcrum at one end (C), and the other end (B) on the scale.  We can use a simple straight beam, or in this case, it is actually an “A” shape, which allows the machine to balance with less risk of tipping.  It does not matter that the two beams are not the same length, what matters is the length from point “B” to each “C” is the same on both sides.  Also, (for our simple math) that the machine is centered on both beams.

I have used steel angle iron pieces placed “V” up, to more accurately measure to the point of contact.  Same on both ends.

Once the beams are setup, (just the beams, no load) take note of the value showing on the scale.  This weight is now the “new Zero”.  In our example, the beams without the machine weigh in at 41 lbs. 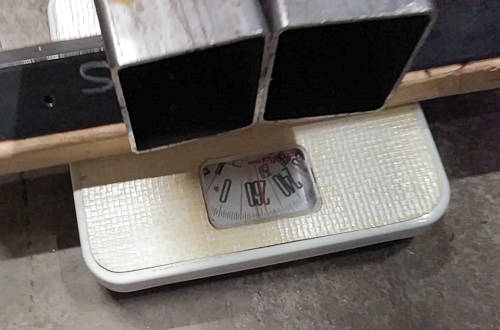 Next, we place the machine at center on each beam, and again read the weight measurement.  With the machine on the beams, the scale indicates 259 lbs.  To get the increase in weight applied by the machine, we subtract 41 from 259 and get 218 lbs.  Assuming the setup is correct, 218 lbs is half the weight of the machine.  Double it, and we now know the machine weighs about 436 lbs.

The accuracy to weigh heavy things with this method depends on accurate length measurements for the beams, and for placement of the load.  The more careful we are with setup, the better the final result.  Also, a longer beam increases accuracy simply because any error we might create in setup becomes a smaller portion of the total.  Longer beams are heavier, but it helps accuracy as we weigh heavy things.

To weigh things that are a lot heavier than the scale can measure, we need to change our setup and do a little more math.  Basically, as we move the load closer to the fulcrum end (C) it will put more weight at C and less at B.  More leverage.  Again, like a wheelbarrow.

We can use a simple single beam, or the “A” shape as illustrated with the blue machine above.  Either way, we’ll use this new diagram and longer equations to make the calculations: 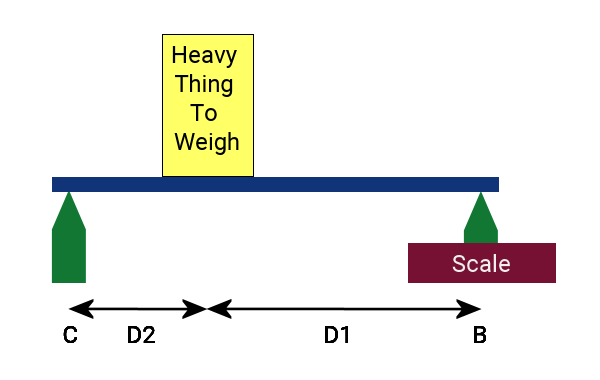 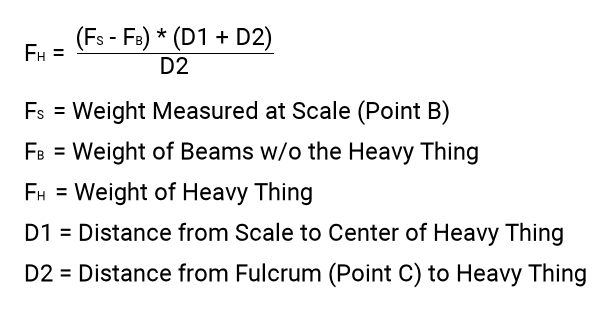 Though it seems more complex in using formal equations, it’s really the same as image above.  It’s a method to weigh things that are much heavier than what the scale can directly handle.  Like how to weigh a trailer.

In the video below, you can see a simple setup to weigh a trailer.  This uses both the more complex method as described above, then the “Weigh Things In Parts” section we will explain later.  We’ll show the example, then describe what we did and why.

The Video does a pretty good job of showing what we did.  However, here are some points to notice.

For me, I try to lift carefully to make sure I’m not exceeding the scale at any point.  By putting too much weight on the scale, it can cause damage.  If you see the scale going too high, just reduce the distance D2.  Making D1 longer and D2 shorter will allow you to weigh a bigger heavy thing.  The down side comes if the distances become too short, then you lose accuracy.  (Or you have to be super careful with your measurements).

Side Note On Tongue Weight

Tongue weight and it’s % of the trailer was noted in the video.  See the article about tongue length, and note that this tongue is quite long.  A longer tongue allows a lower % of trailer weight on the tongue.  (Not by much, but a little.  We will let you do the math on tongue weight versus trailer tongue length.)

The above example to weigh a trailer shows a few techniques.  First, using levers.  Second, dividing the problem into manageable parts.  It would be near impossible to weigh the whole trailer all at once, but like in the video, we can do it in pieces.  Most importantly, we can extrapolate that to many variations — like in the video where we weigh one side of a trailer, assume symmetry, then weigh the tongue load.  Add them all up, and you have a total — like in the video.

It works in cases like to weigh a trailer because we don’t need to be super accurate.  While we know it’s not perfect, yet to give us an idea of the accuracy, let’s just re-do the calculations.  Let’s say we were off by an inch in measuring D2.  We measured D2 = 35.25″ and that gave us a side weight of 535 lbs.  But, what if we made a mistake and it were actually 34.25″?  Then the answer for the side weight of the trailer would be 546 lbs.

A 1″ measurement mistake is pretty big, yet, because of the long beam, the one side weight answer difference is only 11 lbs.  In terms of total trailer weight, 22 lbs (double it for both sides) is less than 2%.  Not really very significant.  Just food for thought.

The keys here are:

As I have used these methods to weigh heavy things, like a trailer, the hardest part is often getting the lever under the heavy thing.  In the case of the blue machine above, I had to work the machine up the lever, carefully.  I needed my gantry crane, but didn’t have it there.  I use the crane a lot for lifting things just like this, for this very purpose.  It’s much more controlled when you can carefully set the item onto the lever system.

Be creative (like using wood under the trailer wheels) as you lift things to weigh them.  Just take care with it, and be safe!  It can do a lot of damage if something falls.

Are Aluminum Trailers Good or Bad?

What Is The Best Trailer Security?

How many trailers are stolen each year?  That’s a question worth pondering, because if you put a lot of sweat and love into building a great trailer . . . . if it disappears, it’s heartbreaking.  We don’t like to…

There’s always more to it.  Our previous post titled “Where Does The Axle Go?” has spawned a lot of great questions.  Here is one in particular asking some very relevant info about calculating axle position.

Do you believe the old saying  “Necessity is the Mother of Invention”?  Well, I have a need, but I don’t need an invention, just a quick solution.  So, maybe Necessity is really the Mother of Creative Solutions! 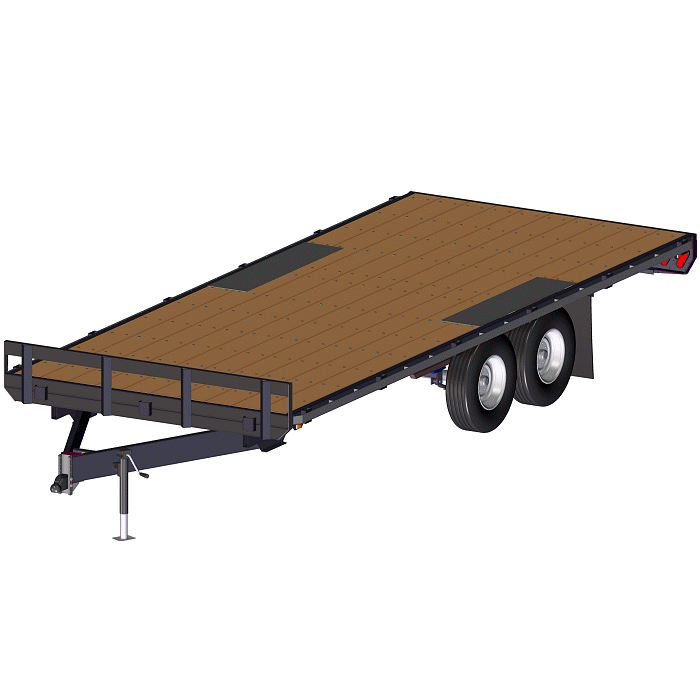 When heft is on the agenda, consider this beefy version of our 20’ length deck-over trailer plans.  With many options like all our trailers, this tandem axle is super heavy duty for rigorous jobs.

What is Your DIY Legacy?

Who influenced your creativity and Do-it-Yourself enthusiasm?  Was it your dad?  A shop teacher?  Or a neighbor that was into cool projects?