There is some disagreement in trailer building about how to weld-on trailer spring brackets (also known as spring hangers).   Some of you have sent questions about which techniques are best, especially from the article about Mounting Trailer Axle Springs.  I’m glad for your interest, so let’s add some additional detail.

Apparently, it’s this image and the instruction with it that have caused some question.  Since there are differing opinions out there, let’s look at both sides and the engineering involved.

At Mechanical Elements, we think it’s great to consider other approaches.  We can always learn something from others, then as we become more informed, we make better decisions.  For trailer spring brackets, there are times when one method is better than another.  Hopefully we can shed some light on what is best in various situations along with some engineering for “Why?”.

Let’s start with the 2 main points of view.

1st, Weld Across The Beam 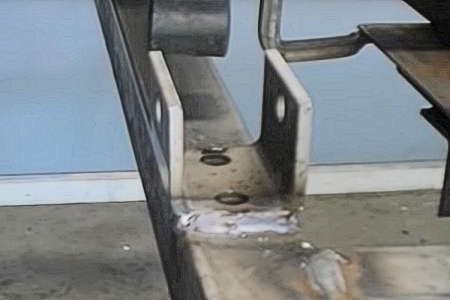 One technique is in this video.  Here is a guy claiming “most manufacturers” say weld the bracket ends only, maybe just a little on the sides.  See this Everlast Video specifically from 5:16 to 5:36.  We’ll refer to this as the “Everlast” video.  (I wish he gave reference to the  comment about “most manufacturers” and where we can see their recommendations.)

Overall this is a great video about mounting trailer spring brackets, but there are a few things he says that made me cringe.  We’ll go into one of those later in this post.

Welding across the beam at the front and back of the bracket is perspective 1, and is pretty typical.  See the image.

2nd, Weld Along the Beam 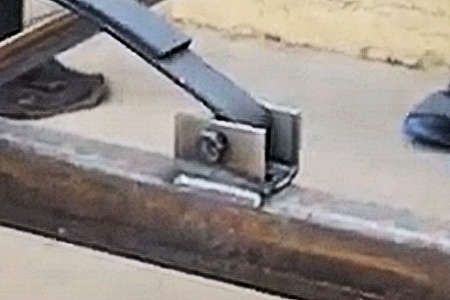 The second perspective is welding the sides of the bracket along the direction of the beam.  We see the “weld along the beam” approach in this Johnson Trailer Parts video, (several places like 0:24 and 0:47).  There is no explanation, in the video, but it’s a good demonstration of the technique.

Basically, this is also the approach shown in the CAD image above — suggesting we should not weld across high stress areas of a load carrying beam.  Interestingly, the American Welding Society comment from RonG about welding to load carrying beams is similar.  They basically say don’t do it, and for good reason.

Both videos show welding with a “MIG” style welder, which is by far the most common for building trailers.  Both guys obviously have experience, as well.  If you are using a different welding process, especially if you are newer to welding, the way to attach trailer spring brackets can have some additional considerations.

As you read the info below, think about how a less-than-perfect weld will hold.  Thank about grinding for clean-up in the weld area, and how that affects strength.  Finally, if you’re into TIG, then much of this does not apply, because TIG has about the cleanest, smallest, least intrusive welds there are.  Here’s more info about welding types.

Engineering:  From A Bracket’s Perspective

Let’s look for a moment ONLY at the Spring Hanger perspective.  From purely a Strength standpoint, welding all around is best. Welding just on the ends (across the main beam) might be second.  Why? 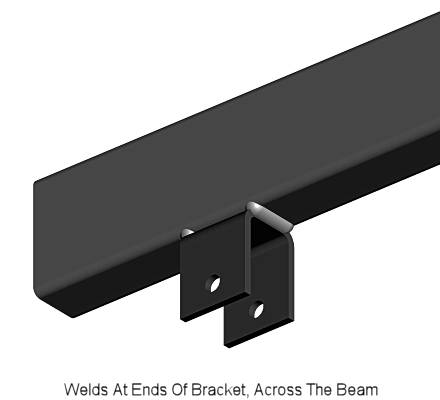 Welds do best when forces involve the whole weld.  For a trailer spring bracket, the largest forces support the trailer weight.  A vertical force that needs almost no weld.  The 2nd highest loads try to slide or tip the bracket, fore-and-aft, like when braking, encountering bumps, and other dynamics.  For those, a weld across has a slight advantage because forces want to pull against the “whole” weld at once.

Next, the Everlast video discusses “draw” when welding.  In previous articles we call it “pull”, or “weld pull”, but it’s the same.  (Here’s an article about compensating for welding stresses.)  He’s absolutely right about “draw” when welding, and we need to work with it.  For the brackets, he says welding the sides can “draw or bow the trailer or cause a problem with the hanger”.  I would love to hear more about what he means.  Anyway, for the bracket, there are 3 important things to know.

Again, these are a perspective for the bracket.

Engineering:  From The Beam’s Perspective

Looking now at beam strength, any welding will weaken it.  The issue is discontinuity in material properties as you go from not welded to welded and again to not welded.  Welding creates a change in a local area with the extreme heating, then cooling.  Metaphorically, it’s like tying a knot in a rope.

On a trailer, strength of the main beam is primarily bending, meaning the primary forces run lengthwise.  Any interruption to the lengthwise load carrying continuity — adds some degree, perhaps tiny, of weakness.  In terms of beam strength, this is a potential point of failure — especially when considering fatigue.  To emphasize this point, most fatigue failures of welded structures happen just to the side of the weld.  This is where the material properties are changed by the heat of welding.

So, looking at the beam, if we can interrupt the load direction paradigm minimally, then it is stronger.  Also, it will have less weld pull.  See the “Weld Affected Areas” in the images below for more on beam strength when welding on trailer spring brackets.

Because trailer main beams are primarily in bending, the load direction paradigm puts the highest stress at the outermost faces.  For a trailer, that’s the top and bottom faces of the main beam.  That’s where we want the least interruption, yet it’s also where the trailer spring brackets mount.

Here’s another illustration of the magnitude difference in forces from the top of a beam to the bottom.  Lines of action are there, as well as the magnitude of the forces as length of the arrows.  Red is tension force, and blue is compressive force. 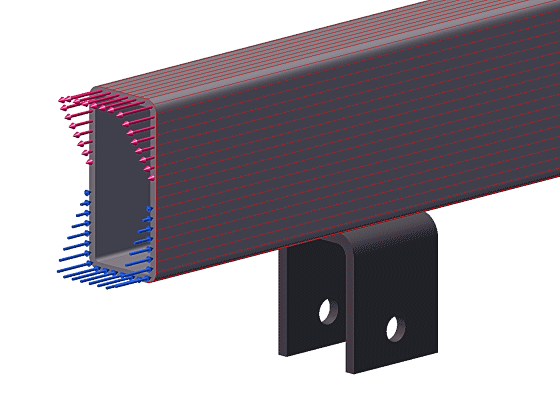 The graphic illustration shows continuity of a beam load along the beam.  While it is a simplification, it illustrates the importance of the top and bottom faces.  The top and bottom areas have the highest stress, so we don’t prefer to interrupt them.  (It’s not impending doom, yet it is weaker.)

The next illustration shows two cross sections of the beam highlighting weld affected areas with “cross” welds, or “side” welds.  Yes, the side welds are longer (deeper into views shown), but they don’t cross as many “lines of action” for the primary bending forces. 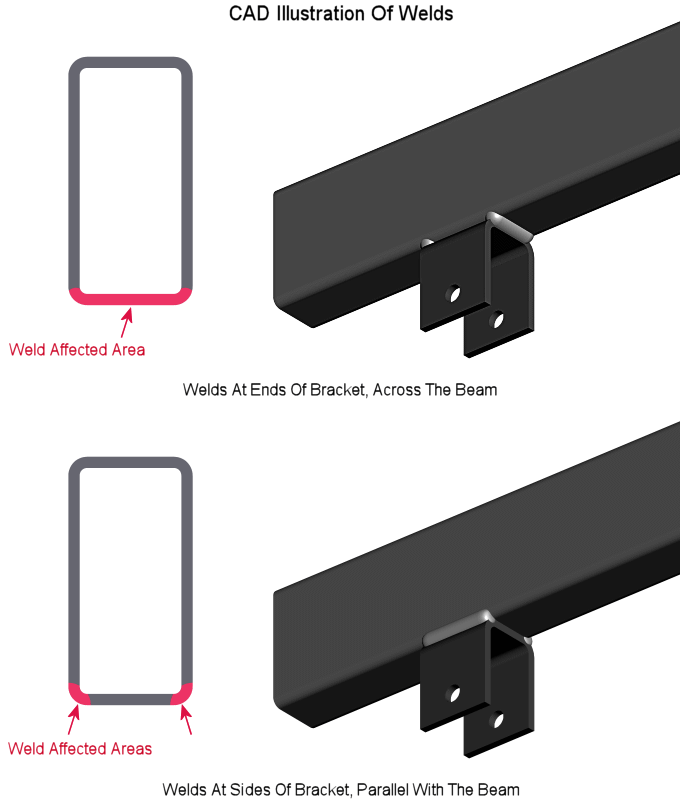 To be clear, the above concepts are the theory.  Please, this is not a time for alarm.  The degree of weakening is small, and many trailers have cross welds.  While it’s not the best choice, it’s also not a catastrophe waiting to happen.  That said, when beams do have trouble, it’s often right near the welds.

Spring Hangers In The System

We always design so both the beam and the spring hanger are stronger than needed.  In other words, they have a safety factor.  Since trailer spring brackets are often thicker than the beam material, the lion’s share of weld degradation is in the trailer frame.  The bracket strength is not affected as much.  Also, no matter where you weld a bracket you are not likely to introduce a fatigue failure point because brackets don’t flex like the beam does.

Do we then need to decide which is more important? — the main beam, or the spring hanger?  Or maybe we can achieve both, and get some other great benefits as well.

In the bicycle industry they conquer localized weld distress by heat treating the entire bicycle frame after welding.  (Particularly Aluminum because it’s much more prone to fatigue failure.)  If they don’t, especially with the very thin materials, the frames will fatigue and crack.  You could do a post-welding heat treat with a trailer frame, but the size of the oven is rather impractical — especially for DIY.

Now the big question is:  Do these theoretical concerns translate to something practical?  These thoughts make the assumption the bracket is not strong to hold the loads.  Yet, I would argue the bracket has a higher safety factor than the beam in most cases. 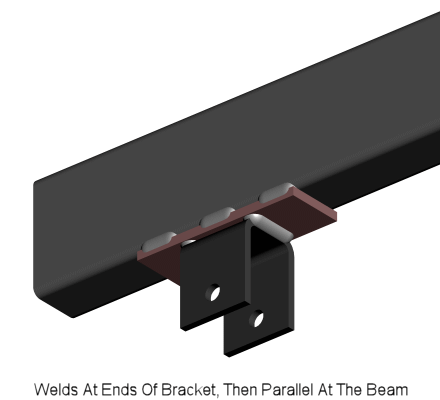 There is always a solution, and this time, the solution combines both the above welding approaches.  It also incorporates another really important stress reducing technique highlighted in the article:  There’s More To It – Mounting Trailer Axle Springs.

A buffer piece between the spring hanger and the main beam accomplishes the best situation for both the beam and the trailer spring bracket.  Then, use the welding positions to minimize heat distress.  Additionally, this approach spreads the loading stresses to the beam as noted in the mentioned article.

As A Side Note: 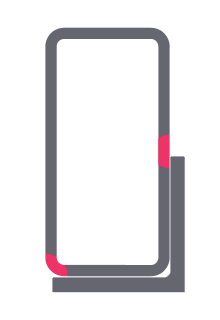 In most of our trailer plans, we recommend a piece of angle iron as the buffer.  It makes one weld in the bottom corner, but the other weld line is higher on the side of the main beam, where stresses are less.  It’s a simple way to make a much stronger connection for spring hangers.

If you listen close to the narration in the Everlast Video ( 5:16 to 5:36 ), you’ll hear him say the solution to “weld draw” because of welding on the bottom, is to run another weld across the beam top.  Basically, the technique puts weld bead across the top of the beam to match the ones across the bottom (holding the spring hangers).  He’s suggesting that you weaken the top of the beam to correct an issue of weakness created on the bottom.  Yes, it will work (as far as “drawing” the beam), but think about it . . . If the process he’s suggesting requires you to further weaken the beam, that’s a big red flag.  A long buffer like the angle iron we suggest above won’t require added weakening with welds that look terrible across the top surface of the beam.  From an engineering perspective, his suggestion is a terrible idea.

So, our recommendations are pretty simple:

The difference from a strength and stress perspective is significant, which is evident using engineering stress analysis.  Look closely at the color differences — blue is less stress, green then yellow then red is more stress.  Fortunately, these don’t show any of the bright yellows or reds. 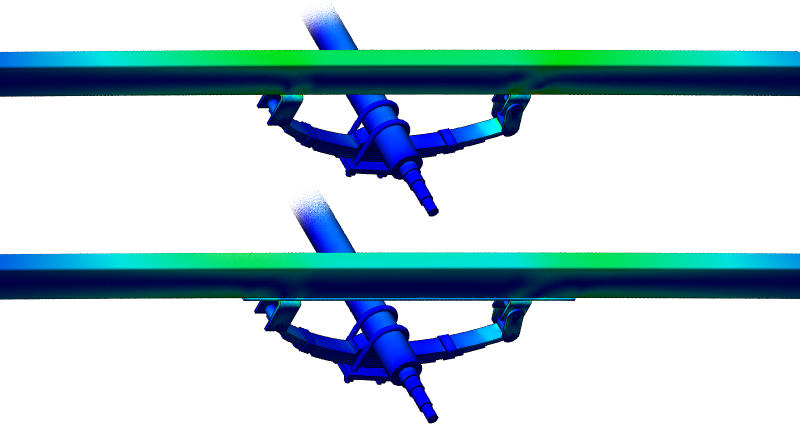 Anyway, I fully understand that people have their reasons for doing what they do.  However, I have not seen a whole lot of true engineering going into things like DIY trailer builds.  Mostly, trailer building is a mature industry that continues with the same thing year after year.  In specialty trailers and over-the-road trailers you see more, which is great.  And, there is some trickle down, which is also good.  With concepts like this, I have tried to put a little more engineering into DIY basics.

Even though it’s a little long-winded, hopefully the above explanation helps.

Get Thread Tapping Straight 9 Essential Tools For Your DIY Shop